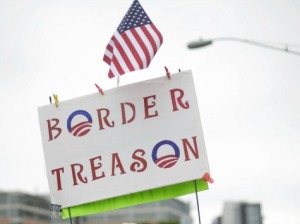 A grieving father is asking President Barack Obama to bring his son, who was killed by an illegal alien, back to life with an executive order on immigration.

“While your Executive Order pad is out, can you write one to bring my son and the tens of thousands (actually over 100,000) killed by illegal aliens back to life and to bring our destroyed families back together?” asks Don Rosenberg in a letter to Obama. His son Drew was killed by an illegal alien who ran over him in 2010.

In the letter, Rosenberg notes that President Obama’s administration refused to deport the illegal alien who killed his son.

“I know that shortly you will be issuing some sort of Executive Order protecting millions of lawbreakers, many of whom have killed people but all of whom share some responsibility for those killed,” Rosenberg wrote. “I know that you want to prevent their families from being separated. By the way, your administration refused to deport the man who killed my son. I was told, ‘He’s only committed one crime of moral turpitude.’”

Rosenberg’s letter to Obama was a follow-up from a previous letter he sent the President this summer, a letter to which Rosenberg has not received any reply:


On August 18, 2014 I sent you a letter through the office of DHS Deputy Secretary Mayorkas. I had met with Deputy Secretary Mayorkas in Los Angeles in July and asked him if he would deliver a letter to you. He agreed, so I sent it to his assistant Robert Silver. I also sent the letter to Secretary Johnson, whom I had met in May through Christian Marrone on August 20, 2014 and asked him to forward the letter to you. To date I have not even received the obligatory, “I’m sorry for your loss” letter, so I am sending you another copy. I do not know if you received the letter although I have no reason to believe that Mr. Johnson, Mr. Mayorkas or their staffs did not deliver it to you. Considering your lack of recognizing the true victims of illegal immigration (no, not those here illegally) I certainly would not be surprised if you or any of your [aides] just tossed it in the shredder.

In the initial letter, which was sent in August, Rosenberg asked Obama to visit his son’s grave, to convince his dead son Drew of the merits of his planned executive order for amnesty.

“Before you illegally say, ‘Welcome to America’ to those who have caused so much pain and suffering, on your next trip to California let me take you to Drew’s grave, and you tell him this is the right thing to do,” Rosenberg wrote back then, NewsMax reports. “My son and all of the others are considered collateral damage in the quest for votes and campaign contributions. Illegal immigration is not a victimless crime.”


Previous Woman Uses Facebook to Lure Another Woman Into Meeting, Then Murders Her and Kidnaps Baby