A tip to 9-1-1 about a gunman on the run led to an officer involved shooting. The problem is that the person the cops shot wasn’t the suspect, but the 9-1-1 caller, according to the Vancouver Police Department.

The police were conducting a manhunt on Halloween morning for John Kendall, 59, after Kendall shot his neighbor, Abigail Mounce. Kendall had been to court that morning with his neighbor for a civil dispute prior to shooting her. 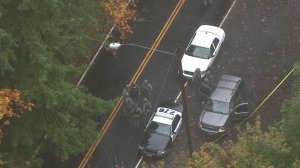 As the manhunt was ongoing, a tipster called into 9-1-1 to report a suspicious car parked near a wooded area near a gravel turnout, which belonged to the suspect.

The caller parked his car in the same area as Kendall’s vehicle and waited for law enforcement after getting off of the phone with the dispatcher.

When officers arrived on scene, they saw the 9-1-1 caller get out of his vehicle and walk around the back of his vehicle. The cops, jacked up on adrenaline and fear, decided to open fire on the innocent man.

The man was hit in the leg by the gunfire and took cover behind a pile of gravel and then attempted to return fire with his own weapon, according to KPTV.

The citizen then called 9-1-1 again to report that he had been shot by the cops, at which point the responding officers decided to forgo killing the wrong person and made contact with the innocent man.

Police claimed that due to the terrain they weren’t able to see Kendall’s car when they arrived so they just assumed the tipster was Kendall. Never a wise idea to simply assume someone is a gunman.

When engaging in the use of deadly force it is always a good idea to make sure that you are shooting at the right person. If you shoot the people who call you for help, or who provide information to assist you, it creates a dynamic where most rational people will not call out of fear of being gunned down wrongfully, as happens all too often.

The citizen was taken to the hospital and treated for his gunshot wound. Kendall was later found dead, in the woods, with a self-inflicted gunshot wound.

The lack of training in a situation such as this boggles the mind. The officers simply made fear driven assumptions, which could have potentially resulted in the killing of an innocent man, who had in fact attempted to assist them in their investigation.

Once again it seems the most dangerous thing you can do, even with a gunman on the loose, is to call law enforcement, as you are more likely to be killed by the cops than the gunman himself.
Source: The Free Thought Project