An Anniston gun store owner is in hot-water for a message he sent to veterans. Michael Schuette told his Facebook friends veterans are not heroes.

An Alabama business owner went on an anti-veteran rant on Facebook, and now, since the post went viral, he’s getting attention from all over the nation he claims his family is receiving death threats.

Michael Schuette, owner of Outlaw Gun Repair and Hydrographing in Anniston, Alabama, didn’t expect that his Veteran’s Day rant would make as big of an impact as it did.

“It went viral quick like nothing I’ve ever seen and with good right,” Schuette told WIAT. “I said very offensive things I think that I was not thinking at the time.”

His post angered both veterans and civilians alike, and while some may agree with his views, the tone in which he wrote it and the language that he used were what disturbed most people.

“OK, for my yearly Veterans Day speech…to all vets…you are NOT hero’s,” Schuette’s post reads. “You got paid to learn how to fight and kill for profit. You “Served” your leader…You followed the rules and made it out of whatever country you terrorized alive…You got a check and a holiday. YOU NEVER FOUGHT FOR ANY OF MY FREEDOMS!!!!! You fought for corporate interests…You never sacrificed for this country…You did so for your government owners…You did nothing for American citizens…YOU WANNT MEET HERO’s???? Well, shake hands with CIVILIAN EMTs, nurses, firefighters, lawyers and anyone in the ACLU…Please feel free to add some more hero’s below but Veterans are you NOT American hero’s.” 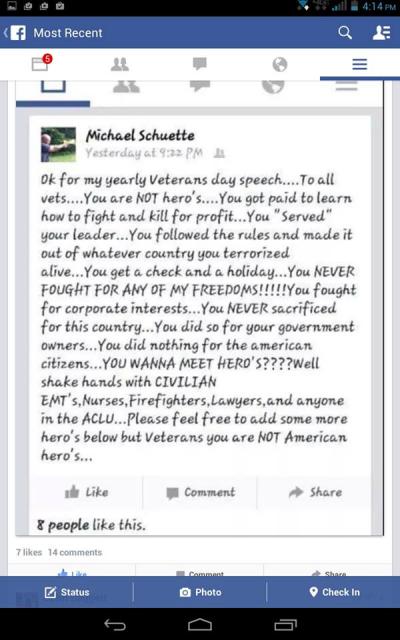 Not long after posting the rant, a screenshot was shared all over Facebook, specifically on military-related pages, and people were outraged. Schuette says that since his post, his family has already received death threats.

“I do understand my comment was very harsh. I sometimes say controversial things but I’ve never had anything like this,” said Schuette. “I took my anger out on the victims of the whole thing. I’m mad at the system that puts our kids out there to die.” 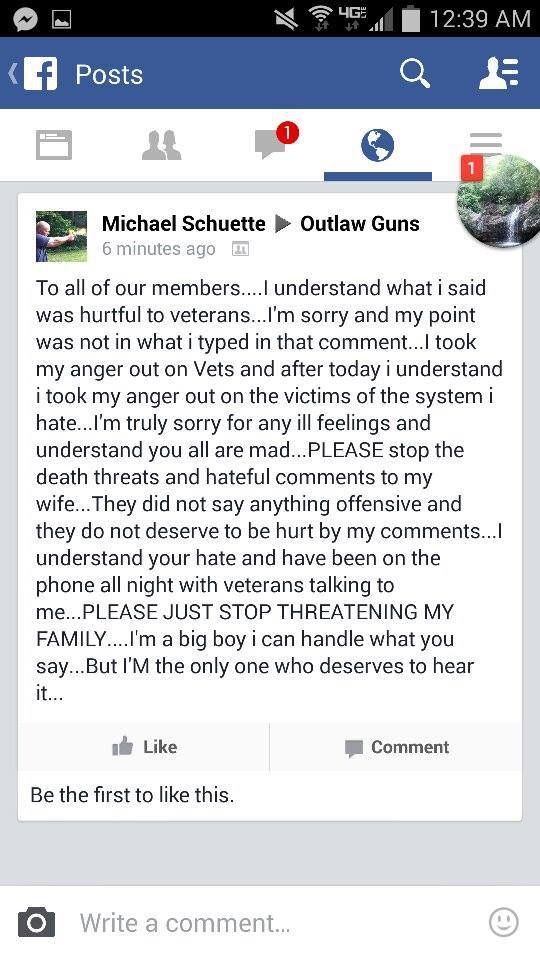 In the aftermath of the controversial post, Schuette says he is stepping down from his position in his business and will let his wife take over running everything.