The Justice Department is scooping up data from thousands of cellphones through fake communications towers deployed on airplanes, a high-tech hunt for criminal suspects that is snagging a large number of innocent Americans, according to people familiar with the operations.
The U.S. Marshals Service program, which became fully functional around 2007, operates Cessna aircraft from at least five metropolitan-area airports, with a flying range covering most of the U.S. population, according to people familiar with the program. 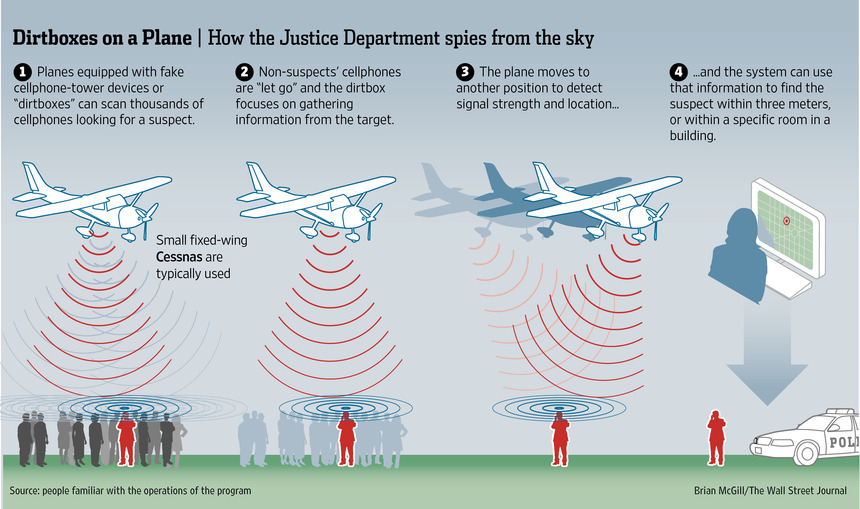 Planes are equipped with devices—some known as “dirtboxes” to law-enforcement officials because of the initials of the Boeing Co. unit that produces them—which mimic cell towers of large telecommunications firms and trick cellphones into reporting their unique registration information.
Cell phones are programmed to connect to whichever nearby cell tower has the strongest signal. The fake cell towers trick phones into thinking they have the strongest signal, then read the devices’ unique registration numbers when they connect, the Journal report says.

The goal is to locate cell phones linked to people under investigation for crimes like selling drugs, but in the process the program collects data about people not suspected of any crime, the report says. The fake cell towers determine which phones belong to criminal suspects and “let go” of those that aren’t.

Next The everyday, mundane life of a jihadi….