The animals in #Ferguson are making plans to shut down Clayton while they await the grand jury decision in the police shooting of the thug known as Michael Brown.

They seek to hurt the Clayton community economically if they don’t get their way, regardless of whether or not the decision made is right or wrong. According to Fox2Now, the information was released Thursday night during one of the meetings in south St. Louis. 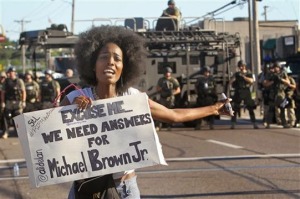 The organizers of the meeting have stated that they’re hoping for hundreds if not thousands of people to show up in Clayton on the first workday after the grand jury reaches a decision.

So, I guess they’re expecting and/or asking everyone to not go to work and instead, come and protest? Sorry, but many of us have jobs and in order for these leeches to continue getting welfare checks, we must go to work each day.

If the grand jury decision is released on Friday, the organizers have planned to turn out in full force on Monday. They will meet in public green spaces and then they may spread out in small groups possibly taking part in civil disobedience like shutting down roads. There was talk that if they tried to stop trials in courtrooms they could get be put in jail for a longer time than just for blocking traffic.

Michael McPhearson, the Don’t Shoot Coalition Co-Chair, said he wants people in the St. Louis area to know they are not encouraging violence. “We want the people to know these meetings are about non-violence direct action. Some of it will be people talking people expressing themselves. There’s nothing we’re doing to try to create violence. We don’t want to diminish tension without there being change,” McPhearson said.

How the hell can this not be considered as economic terrorism, by threatening to shut down a community because you didn’t get your way?

This kind of bullshit really pisses me off, can you tell? I am SICK TO MY GUTS of a certain element of society acting like a bunch of fucking animals anytime they don’t get their way about something!