When I was in college we relieved exam stress by running, participating in intramural sports, or just plain catching up on lost sleep, and there was always a keg party happening somewhere.

The times they are a-changing! These days sex with farm animals is what it takes to relieve the incredible stress and pressure so common during exam time.

No doubt PETA will mobilize to defend the rights of the violated sheep, as animal rights activists gather at the Fresno State sheep barn to hold hands and sing kumbaya, or maybe Mary Had A Little Lamb. You never know which direction those animal rights types are going to take.

So, I’m interested to see what the charge will be for the sheep violator. Rape? How can the prosecution be certain that the sex wasn’t consensual? The sheep was used for breeding, so it is not a stretch to believe that she was a shameless slut. Statutory rape? California’s age of consent is eighteen. Most sheep only live ten to twelve years, and are fertile until only around seven, so statutory rape should certainly stick.

Does the sheep have a civil case? The damages for pain and suffering, given the publicity surrounding the event, could be astronomical. Sheep have feelings too.

While it is rumored that the assaulter chose the ugliest sheep in the barn, it was late and he was drunk, so I think we can give him a pass on that.

A lot of questions yet to be answered. Check Powdered Wig Society regularly for updates.

A sheep that was sexually assaulted by a Fresno State student is now being monitored by a veterinarian.

A sheep that was sexually assaulted by a Fresno State student is now being monitored by a veterinarian. 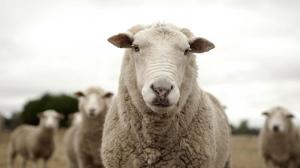 Students on campus are still talking about what everyone is calling the “sheep incident.” A computer engineering student is now facing serious charges after Fresno State police became involved.

Fresno State Ag students say shock, doesn’t even begin to describe what happened on campus. It was late at night, a student heard noises, and found a 23-year-old inside the sheep barn having sex with one of the ewe’s.

Student Marisa Burkdoll said, “It’s just kind of disgusting and revolting and personally makes me angry, I mean why would you do that?”

Burkdoll works with the horses on campus, and oversees every aspect of their care and survival. She heard about the sheep incident through social media.

“There was a post that said something about the sheep unit at Fresno State and some guy was trying to have sex with the lambs,” said Burkdoll.

In fact, there’s even a Twitter handle dedicated to the sheep, which caretakers say is being treated by a veterinarian, and is one of the many animals used for breeding.

Students at the sheep barn say they weren’t allowed to talk, but were repulsed by the act.

Next What .22 Rifle did Bella Twin Use to Kill a World Record Grizzly in 1953?