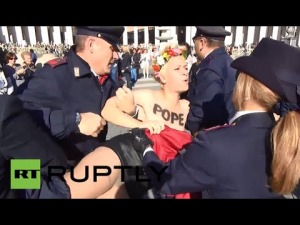 The three women pulled of their stunt on St. Peter’s Square, the enormous plaza located right in front of St. Peter’s Basilica in the Vatican City.

Two of them had “Keep it Inside” scrawled across their backs, an apparent reference to their anger that the Pope’s activities extend beyond the tiny papal enclave in Rome.

The trio, decked out in nothing but black ankle boots, leather miniskirts, and flower garlands in their hair, dropped to all fours and began simulating a lewd act with the crucifixes.

Police immediately swarmed on the women as bemused tourists snapped photographs. Covering the women’s bared breasts with coats, the cops dragged them off, with one of the women crying: “The pope is not a politician, god is not a magician.”

According to the Local’s Italian language addition, the protest was organized to protest the Pope’s planned visit to the European Parliament in Strasbourg later this month.

The protesters say the visit is an attack on Europe’s secular principles. It remains unclear if any of the women will face criminal charges.