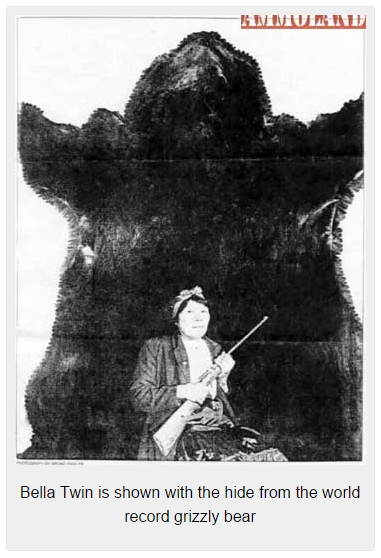 In this famous photograph by Bruno Engler, Bella Twin is shown with the hide from the world record grizzly bear that she shot in 1953 with a single shot .22 rifle.  The question is, what rifle is she holding?

It has been written that Jack O’Conner “heard” that it was an old Stevens single shot.   But as he only “heard” this, I do not think it is at all definitive.  This is said to be from page 304 of “The Hunting Rifle”, published in 1953.   Given that the bear was shot in 1953, and the reference was near the end of the book, it is just possible that O’Conner was referring to the same incident:

“One of the largest grizzlies I have ever heard of was killed by an Indian woman with one shot from an old single-shot .22 Stevens rifle.”

Another account says that the bear was dropped with one .22 long cartridge, but that another 7 or 8 shots were used to be sure that the bear stayed down.  In my research, it appears that somewhere, there is a picture of the bear’s skull, showing 8 or 9 holes.  Note that a .22 long has about 10% more power than a .22 high velocity short, and a good bit less than a .22 long rifle cartridge.

H.V. Stent seems to have one of the best descriptions of the event on the Internet.  From “Grizzly Guns” by H.V. Stent:

Bella Twin, an Indian girl, and her friend Dave Auger were hunting grouse near Lesser Slave Lake in northern Alberta. The only gun they had was Bella’s single-shot bolt-action .22 Rimfire rifle. They were walking a cutline that had been made for oil exploration when they saw a large grizzly following the same survey line toward them. If they ran, the bear would probably notice them and might chase, so they quietly sat down on a brush pile and hoped that the bear would pass by without trouble. But the bear came much too close, and when the big boar was only a few yards away, Bella Twin shot him in the side of the head with a .22 Long cartridge. The bear dropped, kicked and then lay still. Taking no chances, Bella went up close and fired all of the cartridges she had, seven or eight .22 Longs, into the bear’s head. That bear, killed in 1953, was the world-record grizzly for several years and is still high in the records today.

Here is a close up of the rifle.   It appears to be a “boys” type inexpensive .22 bolt action single shot.  There does not appear to be a butt pad.   The forearm is quite short.  For a while, I thought it might be a Tobin, but it clearly is not. 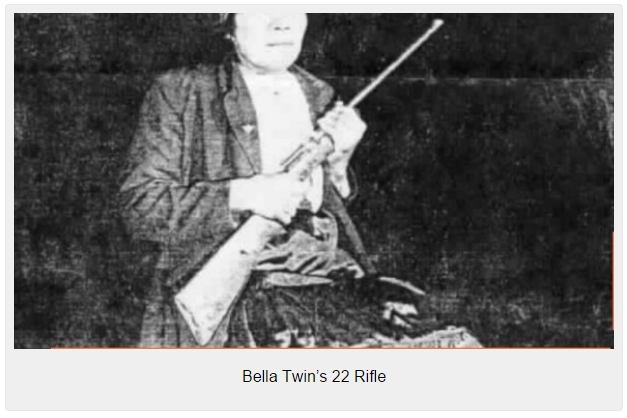 A source on the net says the picture is in the book, Bruno Engler Photography ( tiny.cc/0a2hpx ) by Vera Matrasova-Engler.  The photograph there might show better details, and the skull photograph may be in that book as well.

Different accounts have given Ms Twin’s age from “girl” to 63 or 67.  Perhaps someone in Alberta has access to records that give us more definitive information.