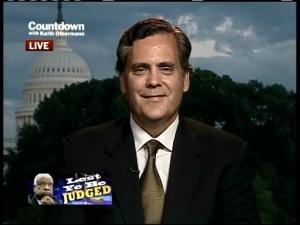 FROM SARAH HURTUBISE, THE DAILY CALLER

Speaker of the House John Boehner has hired Jonathan Turley, a renowned liberal law professor, as his lead counsel in the House’s lawsuit against the Obama administration’s delay of Obamacare’s employer mandate.

Turley is a law professor at the George Washington University, frequent legal commentator and self-avowed liberal. He may be the perfect pick for House Republicans — Turley is not only a liberal, but is friendly toward Obamacare itself, according to his writings. But he’s vociferously pushed back against President Obama’s generous use of executive action in the past and has hit the administration for its implementation of the health-care law and he said he jumped at the chance to represent House Republicans.

“It is a great honor to represent the institution in this historic lawsuit and to work with the talented staff of the House General Counsel’s Office,” Turley wrote at his blog Monday. “To quote the movie Jerry Maguire, the House ‘had me at hello’ in seeking a ruling to reinforce the line of authority between the branches.”

“The question presented by this lawsuit is whether we will live in a system of shared and equal powers, as required by our Constitution, or whether we will continue to see the rise of a dominant Executive with sweeping unilateral powers,” Turley continued. “That is a question worthy of review and resolution in our federal courts.”


Turley has spoken out against not only the administration’s unilateral employer mandate delay, but also Obama’s expected executive amnesty. On Friday Turley warned that Obama was usurping the legislature’s power with his plan for amnesty, which Boehner originally considered including in the lawsuit over the summer.

“No president can take on the power of all three branches and that’s what he seems to be doing,” Turley said about the planned action on Fox News Friday. “He certainly seems to be taking on legislative authority … that does become a government of one.”