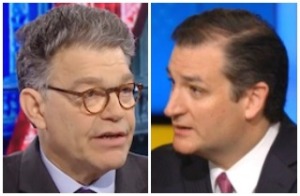 Bottom Line: Everything the government touches turns into a steaming pile of crap! Big Brother, keep your grimy fingers off of our internet. It does not belong to you. It belongs to the people. You are the enemy of liberty!~ Thomas Madison

Senator Ted Cruz raised some eyebrows last week when he straight-up called net neutrality “Obamacare for the internet.” Cruz framed net neutrality as the internet “operat[ing] at the speed of government,” and elaborated in a follow-up op-ed that “it would put the government in charge of determining Internet pricing, terms of service and what types of products and services can be delivered, leading to fewer choices, fewer opportunities and higher prices.”

Al Franken, a Democratic colleague of Cruz’s and a net neutrality advocate, reacted on CNN yesterday by saying that Cruz doesn’t understand what net neutrality is. He explained that the FCC needs to act because it is ISPs controlling internet speeds, not the government, that is the bigger issue here.

Well, today Cruz responded to Franken––albeit indirectly––by way of a video highlighting both Franken’s comments and recent public comments Cruz made on the subject, obtained by The Huffington Post. And ever since making those comments, Cruz has latched onto a new slogan to get his message across: “Don’t Mess with the Net.”

Those last two tweets contain snippets from Cruz’s recent remarks, also featured in the video today responding to Franken. And that video picks up on Franken saying reclassifying the net as a public utility would keep things the same. Why? Because Cruz doesn’t want it to be the same.

Cruz took out one of those classic rotary phones and contrasted it with a very recent smartphone, touting how the latter isn’t classified under Title II and wanting to see more innovation like that.

Next Super-quick video (6 seconds). Abe Simpson has Democrats figured out