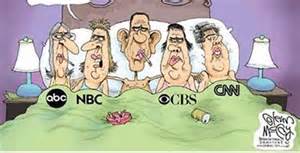 The three major networks, ABC, CBS, and NBC, which have all been very kind to The One over the past seven years, have not been invited to air the President’s immigration speech tonight, where he is expected to grant, by executive order, some form of amnesty for ILLEGAL aliens.

The question is, “Why have the networks been thusly banished?”

A significant percentage of Hussein’s voter base gets its news from the Big Three (The Little Three since Fox News has come along). Is there something (or everything) in the speech he doesn’t want liberal voters to see or hear? Does he believe that they are clueless regarding the debate since the Big Three have given little to no coverage to the issue thus far?


No real surprise is the fact that Univision, the American Spanish language TV network, which caters to hispanics in the United States, will air the speech.

So, the smart money on why the Obama administration is dissing three of King Hussein’s dearest bedfellows is that the speech will be a declaration of complete amnesty, which may finally alienate his long-loyal voter base. At the same time, airing the announcement on Univision will add more hispanics to the Democrat voter rolls.

It will be interesting to see how Republicans in Congress react to the expected executive declaration of amnesty. Hopefully it will be more substantive than the usual strutting to the nearest microphone, scowling and growling at the camera in righteous indignation, then off to the Christmas party circuit.

If, in fact, King Hussein does declare blanket amnesty for illegals he will be encouraging another, much larger wave of illegals waltzing across our joke of a southern border. He will also, again, be shredding our Constitution, to which he is bound by oath to “preserve, protect and defend,” as it is only Congress which bears the responsibility and authority to create or alter immigration law. The chief executive does not now, nor did he ever, enjoy the authority to alter existing immigration law.

For certain King Hussein will be lending much credibility to the growing chorus of Americans who have long been proclaiming that his real purpose is to destroy America.

Congress and the judicial branch should be joining forces to stop this runaway executive. IT IS THEIR JOB!

Next [WATCH] Babysitter, 25, Accused of Having Sex With Boy Who's Only 10