When Moms Demand Action for Gun Sense in America reacted to Texas Governor-elect Greg Abbott’s (R) pledge to sign open carry legislation by vowing to “fight” it, they missed the fact that he wasn’t promoting a novel idea but a noble one already allowable in 44 states with various stipulations.

On August 22, The Wall Street Journal published a Law Center to Prevent Gun Violence map listing the 44 states in which open carry is legal. Some of these states allow open carry without a permit, while others require a permit before open carry is allowable. 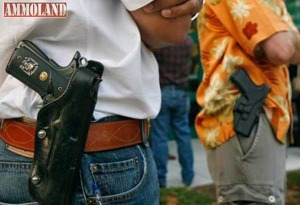 It is crucial to familiarize yourself with the gun laws in these states before attempting to carry a gun in any manner, especially since laws may be loosened or tightened at any time and penalties for making a mistake in each state are vastly different. For example, while an individual without a felony who is 21 years or older can carry a handgun concealed or openly in Arizona without a permit, the Hawaii Rifle Association reports that “concealed carry and open carry are felonies [in Hawaii] without a permit to do so from the chief of police from your county.”

Next #Ferguson Officer Who Shot #MikeBrown Said To Be Considering Resignation