Up to 30,000 missing emails sent by former Internal Revenue Service official Lois Lerner have been recovered by the IRS inspector general, five months after they were deemed lost forever.

The U.S. Treasury Inspector General for Tax Administration (TIGTA) informed congressional staffers from several committees on Friday that the emails were found among hundreds of “disaster recovery tapes” that were used to back up the IRS email system. 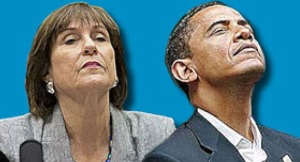 “They just said it took them several weeks and some forensic effort to get these emails off these tapes,” a congressional aide told the Washington Examiner.

The IRS, in a statement provided to the Examiner, said the agency and IRS Commissioner John Koskinen is fully cooperating with the investigation.

Committees in the House and Senate are seeking the emails, which they believe could show Lerner was working in concert with Obama administration officials to target conservative and Tea Party groups seeking tax-exempt status before the 2012 presidential election.

The missing emails extend from 2009 to 2011, a period when Lerner headed the IRS’s exempt-organizations division. The emails were lost when Lerner’s computer crashed, IRS officials said earlier this year.

In June Koskinen told Congress the emails were probably lost for good because the disaster recovery tape holds onto the data for only six months. He said even if the IRS had sought the emails within the six-month period, it would have been a complicated and difficult process to produce them from the tapes.

The IRS also lost the emails of several other employees who worked under Lerner during that period.

Lerner, who retired from the IRS, has refused to be questioned by Congress.

Next VIDEO: Dinesh D’Souza: Obama is an “extremely spoiled brat…since he was two”