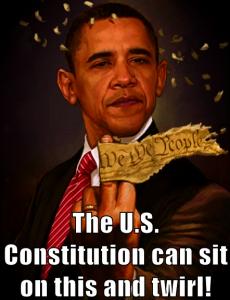 (Tea Party) – Disgraceful and disingenuous are only two of the words that come to mind to describe the outrageous and anti-constitutional actions of the man who was supposed to bring hope and change to America. Instead, he has only brought despair.

Some believe it is time for exuberance, but instead it is outrage and deep-seated anger that has formed against not just Mr. Obama, but Congress as well.

It has become evident Mr. Obama has become hostile to the will and desire of the American people, without any remorse, and filled with reckless disregard for the rule law.

A Tea Party hero and American icon Dr. Martin Luther King stated: “man should not be judged by the color of his skin, but the content of his character.”  It appears Dr. King would be embarrassed by Mr. Obama’s lack of character.


The actions of Mr. Obama must be dealt with by Congress or the American people will find their own resolve, something the Tea Party would never endorse or want to happen.

Congress must act swiftly, without hesitation, and immediately.

Furthermore, impeachment procedures must be followed up with action. Considering Mr. Obama’s belligerent and arrogant mode of operation, strong medicine will have to be administrated.

The strong medicine I speak is full impeachment, which means his removal from office. Once his removal has been approved no doubt Mr. Obama will then turn into a drama queen, creating a soap opera in the White House as if to say: “No You Can’t”.

The last resort would have to be frog marching Mr. Obama out of the White House and returning him to wherever place he calls home, be it Hawaii or Kenya he will have to go.

It is very unfortunate for America and the rest of the world that United States has degenerated to the point where we have become the largest banana republic.

Mr. Obama was elected with high hopes that there really would be good change in a positive manner, but he has devolved the office of the presidency back into the Stone Age.

I hope Mr. Obama does the right thing and resigns before his frog March to the curb.

Steve Eichler is the CEO of Tea Party, Inc. and serves on the board of several  prominent Tea Party organizations and is a lifetime Minuteman.