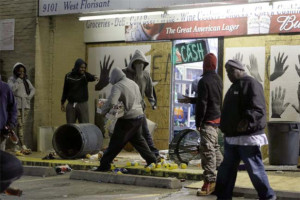 Lt. Governor Kinder on why the National Guard was told to stay out of Ferguson: “When asked why Kinder suspects the Obama administration told Nixon to have the National Guard stand down, he said: ‘there’s nothing else that explains this.'”

By Matthew Boyle, Breitbart
Missouri Lt. Gov. Peter Kinder, a Republican, is demanding that the state’s Democratic Gov. Jay Nixon offer a public explanation as to why he told the National Guard which he had previously mobilized to stand down in Ferguson, Missouri, on Monday night as the city burned in riots.

On Fox News on Tuesday morning, Kinder told anchor Martha MacCallum that Nixon kept the National Guard away as Ferguson burned—and questioned whether he did so in coordination with top officials from President Barack Obama’s administration. At a Tuesday press conference in response to a question from Breitbart News’ Kerry Picket, Nixon said that Kinder’s questions were “false and absurd” and that “politics has nothing to do with what anyone up here is doing.”

Kinder, in an exclusive interview with Breitbart News early on Tuesday evening after the Nixon presser, said that Nixon owes the people of Missouri and specifically Ferguson an explanation as to why he held back the National Guard from stopping the looting, rioting, and burning of businesses and terrorizing of people.

“All I did was ask the question, and he says it’s false. Well, okay, then explain yourself, governor,” Kinder said. “Explain why you gave the order that I supported a week ago to mobilize the guard, to declare a state of emergency, and then at the critical moment you’re nowhere to be found by the mayor of Ferguson who’s desperately calling me in the wee hours of this morning, desperately calling the Speaker of the Missouri House and the floor leader of the Missouri House, Tim Jones and John Diehl, and asking for somebody in state government to stand up and give him some help. All executive power and all command of the Missouri National Guard rests with the Missouri chief executive so none of us could do anything as Ferguson burned. So this mayor made this desperate call as he was watching from his back porch as his city burned.”

Kinder said that Ferguson Mayor James Knowles and Nixon haven’t spoken since the first riots broke out in August.

“Why has he not talked to Mayor James Knowles not twice since this broke on the ninth of August, in 100 plus days?” Kinder said. “Mayor Knowles, we elect non-partisan mayors in Missouri, but if you asked he’d be a Republican in a sort of marginal way. He’s an arm’s length friend of mine and the other legislators I mentioned, but we don’t know him well. I don’t know if that’s why Nixon is pushing him away? But he told me in August when we were three weeks into this, I said, ‘have you spoken to the governor?’ He said ‘I spoke to him for like a minute and a half, when there were like 40 other people in the room but he won’t take my calls.’ He didn’t take his call last night. And not only did he not take his call, but he wouldn’t have his adjutant general of the National Guard take his call. He wouldn’t have his chief of staff take the call. He wouldn’t have his director of public safety call him back. He got nothing. That’s what all of us get.”

Kinder said, too, that Nixon has failed to provide information to even others in state government like himself.

“I’m on the second floor, about 100 paces from his office,” Kinder said. “I sent a staffer down the hall to his door at about 5 minutes to 8 this morning. I said, ‘you tell his people that I’m on Fox News at 8:30 this morning Central.’ I want to know if there’s something you want me to say, or if there’s a brief I should be given so I have something informed to say. They fiddle farted around and trotted out the press secretary Scott Holste who handed him [Kinder’s staffer] the statement he gave last night. How pathetic is that?”

Kinder also detailed for Breitbart News that as Ferguson burned with violent riots, Nixon ordered the National Guard to stand down.

Next [GRAPHIC LANGUAGE] This Is What Racism Looks Like