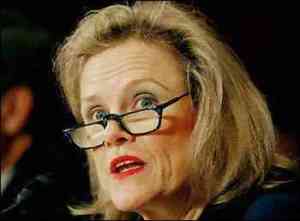 A longtime Clinton ally, assistant secretary of state for South Asian affairs in the Clinton administration, former Ambassador to Tunisia and donor, Robin Raphel, is at the center of an FBI counterintelligence  (spy) probe. She was a registered foreign agent for the Pakistani government up until just days before she was appointed to run the U.S. State Department’s Pakistan aid team ….. (read more)

American investigators intercepted a conversation this year in which a Pakistani official said that his government was receiving American secrets from a prominent former State Department diplomat, officials said, setting off an espionage investigation.

If this were a Republican (think Scooter Libby, who was falsely accused of a bogus leak to the press), the media would be all over this like white on rice. Instead, it has caused barely a ripple in the traitor press.

But the Indian media has been reporting on it  closely. Raphel alienated our ally India and damaged our close relationship with that key ally when she recognized Pakistan’s jihad claims to Kashmir, changing longtime American policy.

In 1995, U.S. diplomat Robin Raphel was the toast of the State department. President Bill Clinton appointed her the first Assistant Secretary of State for South Asia (the post later included Central Asia), and she was known to be close to him and Hillary Clinton …. more here.

Another reason why Hillary Clinton should never be President. Between Huma Abedin and Robin Raphel, Clinton is a one-woman American wrecking ball.

Robin Raphel, a veteran State Department diplomat and longtime Pakistan expert is under federal investigation as part of a counterintelligence probe and has had her security clearances withdrawn, according to U.S. officials.

We are infiltrated with traitors. Always Democrats.

In 1993, President Clinton appointed Raphel as the first Assistant Secretary of State for a newly created position within the State Department[3] that would focus on a growing array of problems in Afghanistan, Pakistan and India, including democratic stability, nuclear proliferation, energy access, Islamist and Taliban extremism, poverty and women’s rights issues.

Raphel was an early and adamant supporter of the Taliban.

She alienated our ally India in her “signature characterization of Kashmir” as “disputed territory,” a first in the annals of U.S. diplomacy, and it made her quick friends in Pakistan. Her predilections were obvious.

Robin Lynn Raphel is a former American diplomat, Ambassador, CIA Analyst and an expert on Pakistan affairs.[1] Until November 2, 2014, she served as coordinator for non-military assistance to Pakistan, carrying on the work of the late Richard Holbrooke, whose AfPak team she joined in 2009.[2] In 1993, she was appointed by President Bill Clinton as the nation’s first Assistant Secretary of State for South and Central Asian Affairs, a newly created position at the time designed to assist the U.S. government in managing an increasingly complex region.

In the 2000s, Raphel held a number of official positions related to her expertise on South Asia.

[…]In 2009, Robin Raphel joined the Afghanistan-Pakistan task force known as AfPak, joining the late Richard Holbrooke, U.S. Special Representative for the Af-Pak region. Her focus was how to allocate U.S. resources committed under the proposed Kerry-Lugar Bill. That legislation was enacted in late 2009, tripling civilianU.S. aid to Pakistan to approximately $1.5 billion annually (Wikipedia)