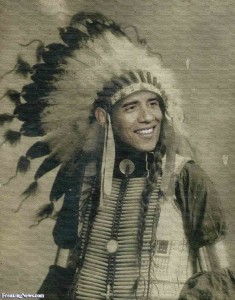 The only Americans who can legitimately object to immigration are native Indian-Americans, President Barack Obama told his Chicago audience Nov. 24, as he made an impassioned ideological plea for endless immigration, cultural diversity and a big government to manage the resulting multicultural society.

“There have been periods where the folks who were already here suddenly say, ‘Well, I don’t want those folks,’ even though the only people who have the right to say that are some Native Americans,” Obama said, rhetorically dismissing the right of 300 million actual Americans to decide who can live in their homeland.

Americans should not favor other Americans over foreigners, Obama demanded. “Sometimes we get attached to our particular tribe, our particular race, our particular religion, and then we start treating other folks differently… that, sometimes, has been a bottleneck to how we think about immigration,” he said in the face of many polls showing rising opposition to his immigration agenda.

Obama denied any moral or practical distinction between native-born Americans and future migrants. “Whether we cross the Atlantic, or the Pacific, or the Rio Grande, we all shared one thing, and that’s the hope that America would be the place where we could believe as we choose… and that the law would be enforced equally for everybody, regardless of what you look like or what your last name was,” said the president.


“That’s the ideal that binds us all together. That’s what’s at stake when we have conversations about immigration,” he declared.

Obama did indicate his approval for some measures to exclude illegal immigrants, even as he works to amnesty 12 million illegals stage-by-stage.  His current amnesty “doesn’t apply to anyone who has come to this country recently, or might come illegally in the future, because borders do mean something,” he said.

In Japan, however, where the government allows little immigration, “they don’t have problems with certain folks being discriminated against because mostly everybody is Japanese,” Obama admitted.

Currently, one million immigrants are accepted each year. That inflow brings in roughly one immigrant for every four Americans who turn 18 each year, even though wages and the number of native-born Americans with jobs have both flatlined since 2000 amid increasing competition from migrants, stalled productivity, accelerating technology and changing trade patterns.

Obama’s speech was a defense of his Nov. 21 unilateral effort to roll back enforcement of immigration law.

That action freezes the enforcement of immigration law against 12 million illegals now in the country and also against every new migrant who makes it over the border. The edict also awards work-permits to roughly four million illegal immigrants, and puts them on a fast-track to citizenship. It also sharply increases the annual inflow of 650,000 guest workers for blue-collar and white-collar jobs sought by Americans. Obama’s speech did not mention theunpopular work permits or the fast-track to citizenship.

Numerous polls show Americans want to reduce or stabilize immigration, and also oppose Obama’s immigration policies by a factor of two-to-one, three-to-one or even four-to-one. On Nov. 4, 66 percent of Oregon’s voters —- including many Democratic voters — struck down a law granting drivers’ license to illegals.

In his Nov. 25 speech, Obama downplayed the existence and interests of native-born Americans as he championed the arrival of many non-English speaking students in Chicago schools. “Chicago has always been a city of immigrants, and that’s still true,” he declared, while adding that “you go to the public schools around here and you got 50, 60, 70 different languages being spoken.”

In fact, Chicago and the United States is overwhelmingly populated by native-born Americans who work, live and learn best in stable neighborhoods and classrooms. Nationwide, five out of six people in the U.S are are native-born.

But more jobs doesn’t mean more wages for Americans. Since 2000, median wages have stalled and the number of native-born Americans with jobs has remained flat amid the annual arrival of roughly one million legal immigrants, 650,000 guest workers and millions of illegals.

The award of work permits to four million illegals will provide more revenues for government, Obama said. But he ignored the likely $2 trillion cost of providing U.S. welfare and social services to the migrants, who average a 10th grade education.

The migrants “will boost wages for American-born workers,” he said, without mentioning that his aides estimated the increase to be worth only $170 per year for each working American, 10 years after his planned amnesty. That estimate is based on many assumptions, including claims that migrant workers will not usually compete against Americans for better jobs, and that the migrants will earn more money because of government intervention.

His forecast of a $170 per year gain claim also ignores evidence that more immigrant workers can swamp the labor market and drive down wages for Americans. That labor-supply reality is accepted by his top economic adviser.