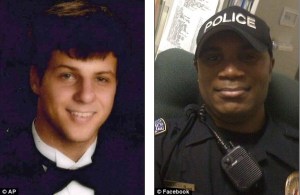 Yes, that is a rhetorical question. The obvious answer is that there is no benefit to the racist race-baiters in protesting a questionable shooting/killing of an unarmed white kid by a black cop. Conversely, there is much political gain and money to be made from burning neighborhoods and businesses to the ground in protest of a more clear case of self defense, like the Ferguson case.

Key to Officer Darren Wilson’s defense in the Ferguson, Missouri shooting of Michael Brown was the claim that Brown had his hand in the waistband of his pants, which Wilson interpreted as a lethal threat, as Brown may have been pulling a handgun. This was clearly impossible in the case of Gil Collar, a completely naked white student at the University of South Alabama, who was acting aggressively toward the police officer, who could have used his tazer or baton to subdue the student.

As in the case of Officer Wilson, the black cop, Trevis Austin, was found to have acted in self-defense by a grand jury. Although the case of Gil Collar is much less clearly self-defense by the police officer than is the case of Darren Wilson in Ferguson, no protests erupted in Mobile, no businesses were looted and destroyed, the only noise from the liberal mainstream media was crickets, and most importantly, completely silent and absent and were the racist race-baiters, Sharpton, Jackson, Holder and especially the master baiter, King Barrack Hussein. That is not a pun. He really is a jerk off!

From The Washington Times:

Officer Trevis Austin shot and killed Gilbert Collar, a white, unarmed 18-year-old man who was under the influence of drugs. A Mobile County grand jury refused to bring charges against Officer Austin, concluding that the officer acted in self-defense.

A two-year-old case involving the shooting death of an unarmed 18-year-old white man by a black police officer is gaining attention on social media in the wake of this week’s protests and rioting in Ferguson, Missouri.

Gilbert Collar, a white, unarmed 18-year-old under the influence of drugs was shot and killed Oct. 6, 2012, by Officer Trevis Austin, who is black, in Mobile, Alabama. Despite public pressure for an indictment, a Mobile County grand jury refused to bring charges against Officer

The circumstances mirror those of the Aug. 9 shooting death of Michael Brown, a black unarmed 18-year-old under the influence of drugs by Officer Darren Wilson, who is white, in Ferguson.

A St. Louis County grand jury’s decision Monday not to indict the officer ignited violence and looting in Ferguson and days of protests nationwide against racial injustice.

The discrepancy in the reaction to and coverage of the two grand jury decisions has not been lost on social media, where critics are citing the Collar case to counter those who say Brown was the victim of racism in both law enforcement and judicial system.

Next SICKENING VIDEO! St. Louis Rams players come out of the tunnel with arms raised for Michael Brown