Following a night of arson fires and bashed storefronts that hit close to home, Greg Hildebrand stood naked Tuesday, drying off from a needed shower, when he noticed somebody on the rooftop.

“I opened the window and said, ‘Hey, can I help you?’” said Hildebrand, 35, a website developer.

The man said he was security and would be up there at night with others to protect the pocket of second-story apartments and lower-level storefronts near the Ferguson Police Department. A day earlier, rioters had broken out windows below Hildebrand’s apartment in the 100 block of South Florissant Road and torched a nearby beauty supply store. 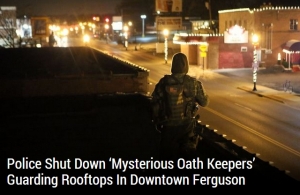 “I am in the middle of a difficult spot,” Hildebrand said. “I feel a lot better having those guys up on the roof.”

But he wasn’t clear exactly who “those guys” were or where they came from.

Puzzled and alarmed protesters have wondered, too — some accusing the mysterious guards in military fatigues of being in the Ku Klux Klan.

In fact, they are volunteers affiliated with a 35,000-member national organization called Oath Keepers. Yale Law School graduate and libertarian Stewart Rhodes said by telephone from Montana that he founded the group in 2009 to protect constitutional rights, including those of protesters confronted by what he described as overly militarized police.

Police questioned group members early in the week and allowed them to stay. But Saturday, after an inquiry by a reporter, St. Louis County Police officers ordered the Oath Keepers to leave the rooftops.