Five players from the St. Louis Rams professional football team showed solidarity with Ferguson protesters on Sunday by walking onto the field with their hands raised in the air. Now the local police union wants them to be punished.

Rams players Tavon Austin, Stedman Bailey, Kenny Britt, Chris Givens and Jared Cook did the gesture during Sunday’s game against the Oakland Raiders at the Edward Jones Dome in St. Louis — 11 miles from the spot where Darren Wilson, then an officer with the Ferguson Police Department, fatally shot unarmed teenager Michael Brown on August 9. 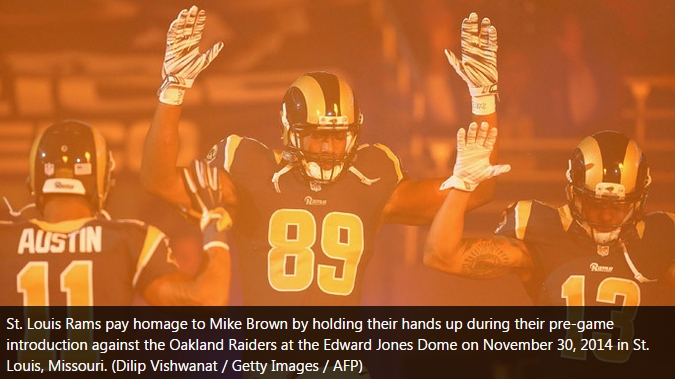 The St. Louis Police Officers’ Association said on Monday that the five NFL athletes who displayed the “hands-up-don’t-shoot” pose embraced by protesters in nearby Ferguson should be “disciplined” over an act the union called “tasteless, offensive and inflammatory” to cops around the United States.

Last week, a grand jury ruled there was not enough evidence to charge Wilson, 28, in the killing, once again spawning protests in Missouri and around the nation. As during an early round of demonstrations that started when Brown was shot three months ago, protesters have adopted the “hands-up-don’t-shoot” pose while on the streets — a rallying cry meant to symbolize claims from some that Brown had his arms in the air during at least some of the 12 shots fired by Wilson.


“The gesture has become synonymous with assertions that Michael Brown was innocent of any wrongdoing and attempting to surrender peacefully when Wilson, according to some now-discredited witnesses, gunned him down in cold blood,” the SLPOA said Monday.

“[N]ow that the evidence is in and Officer Wilson’s account has been verified by physical and ballistic evidence as well as eye-witness testimony, which led the grand jury to conclude that no probable cause existed that Wilson engaged in any wrongdoing, it is unthinkable that hometown athletes would so publicly perpetuate a narrative that has been disproven over-and-over again,” said Jeff Roorda, the business manager of the police union.

Roorda added that Sunday’s incident followed days of dialogue between NFL, Rams and law enforcement officials in which the league assured St. Louis police that “the players and the fans would be kept safe from the violent protesters who had rioted, looted and burned buildings in Ferguson.”

“Our officers have been working 12 hour shifts for over a week, they had days off including Thanksgiving cancelled so that they could defend this community from those on the streets that perpetuate this myth that Michael Brown was executed by a brother police officer and then, as the players and their fans sit safely in their dome under the watchful protection of hundreds of St. Louis’s finest, they take to the turf to call a now-exonerated officer a murderer, that is way out-of-bounds, to put it in football parlance,” he said.

Next [WATCH] 50 ISIS Militants Annihilated In One Of Deadliest Attacks