Thousands of people across the United States walked out of work and classrooms for a nationwide day of action dubbed ‘Hands Up, Walk Out!’ The protest comes after a grand jury declined to indict an officer for killing a black teenager.

The organizers – driven primarily by young people – spread the word online via the hashtag #HandsUpWalkOut, asking people to walk out in solidarity with those affected by police violence in Ferguson, Missouri, and around the country. 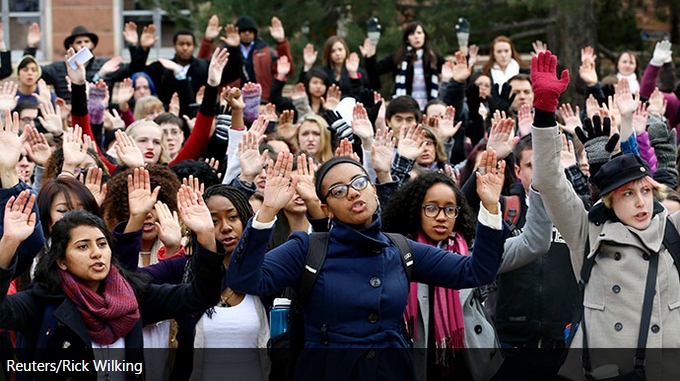 The walkouts occurred simultaneously at 12 p.m. CST and referenced the ‘Hands Up! Don’t Shoot!’ chant that has been used as a rallying cry all over the US ever since African American teenager Michael Brown, 18, was fatally shot by Officer Darren Wilson on August 9.


Additionally, the campaign comes with a list of demands: an end to all forms of discrimination, the full recognition of human rights, justice for Michael Brown, and freedom for all communities.

Specifically, organizers want the US government to “acknowledge and address structural violence and institutional discrimination that continues to imprison our communities either in a life of poverty and/or one behind bars. We want the United States Government to recognize the full spectrum of our human rights and its obligations under international law.”

They are also calling for “an immediate end to police brutality and the murder of black, brown & all oppressed people,” full employment, decent housing, quality education and affordable college education, an end to the prison industrial complex, and a de-militarization of local law enforcement.

There were protests in major cities:

At many college campuses, students rallied or had “die-ins.” At Boston University, Massachusetts:

Students of @Yale in solidarity with #Ferguson http://t.co/NBxIoZ6GXh. We're talking about #handsupwalkout today on @ThisIsFusion

Even employees walked out of work in some cases. At Ebony Magazine in New York City:

At the Arab American Association of New York, Brooklyn:

At the AFL-CIO in St. Louis:

At the AFT Union, Washington, DC:

Teachers Union RT @AFTunion We stand in solidarity with those who seek justice. #HandsUpWalkout #BlackLivesMatter pic.twitter.com/ey6tIKAjPQ

Next Merry Christmas From OPEC, A Gallon Of Gas Could Drop Below $2