A sports bar in St. Louis is boycotting the Rams following a recent incident involving five players who entered the field with their hands in the air. This gesture symbolizes the “hands up, don’t shoot” statement made by protesters in the wake of the fatal shooting of Michael Brown by Ferguson, Missouri, police officer Darren Wilson.

Time Out Bar & Grill, an establishment that had been longtime supporters of the Rams and regularly held happy hour during games, announced via their Facebook page that they would no longer be supporting the team or airing games because of the controversial gesture. According to the Riverfront Times, the owner of the bar did not respond to a request for comment regarding their Facebook statement. 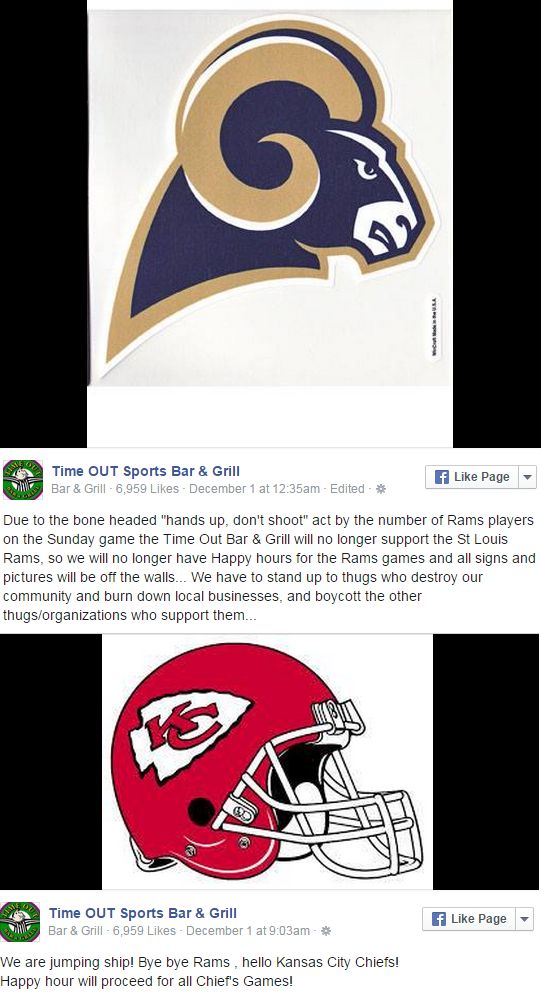 “Due to the bone headed ‘hands up, don’t shoot’ act by the number of Rams players on the Sunday game the Time Out Bar & Grill will no longer support the St Louis Rams, so we will no longer have Happy hours for the Rams games and all signs and pictures will be off the walls,” the post read. “We have to stand up to thugs who destroy our community and burn down local businesses, and boycott the other thugs/organizations who support them.”

When the Rams players made the hand gesture on the field, reactions varied. Some supported the players in exercising their right to protest, while others were outraged and demanded an apology.

Previous LOOTING! When welfare, free housing, and food stamps are just not enough!