Jaleel Tariq Abdul-Jabbaar, 46, of Washington state has been arrested for multiple Facebook posts in which he threatened to kill former Ferguson, Mo., officer Darren Wilson and other law enforcement officers.

According to the criminal complaint filed in a U.S. district court on Monday, December 1st, Abdul-Jabbaar began posting the threatening messages only 5 days after Wilson fatally shot Michael Brown on August 9th of this year which spoke of murdering cops.

“Just finished watching the news and they still haven’t named the white motha fucka the shot that boy,”Abdul-Jabbaar is alleged to have posted on August 14. “Then we can find where that cop’s child goes to school at and hope that the same can be returned back to that white cracka.”

Federal attorneys say that for the next three months, Abdul-Jabbaar posted similar comments which included “We really need to start killing the police,” “I would love to smoke a white motha fuck’n cop” and “We the oppressed people need to kill this white cop.”

According to the complaint, Abdul-Jabbaar started writing in mid-November about wanting to go to Ferguson to find Wilson and kill him.

Since Facebook’s servers are located across the US and around the world, prosecutors say Abdul-Jabbaar “knowingly and willfully transmitted in interstate and foreign commerce” when threatening Wilson’s life.

“Are there any REAL BLACK MEN that would love to go down to Ferguson Missouri to give back those bullets that Police Officer Darren Wilson Fired into the body of Mike Brown. If we’re unable to locate Officer Wilson then We’ll return them to his wife and if not her then his children,” the 46-year-old wrote in one Facebook post, according to investigators.

“We need to kill this white motha f**ker and anything that has a badge on,” he wrote in another. 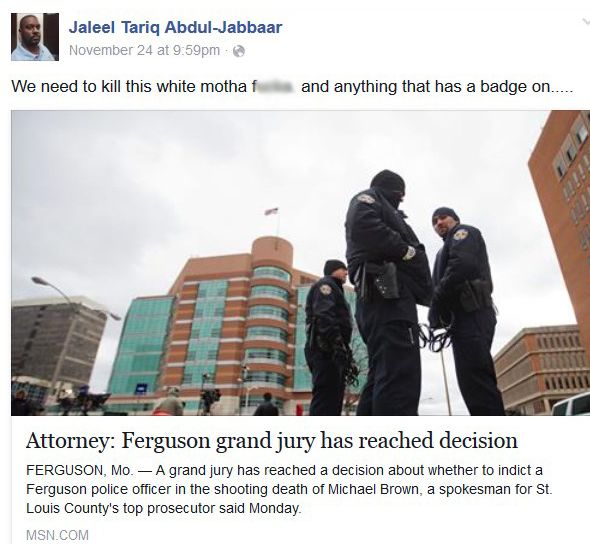 In yet another message, the man professed that he was “ready to go and kill some cops.”

U.S. Attorney Annette Hayes said in a statement that freedom of speech does not cover threats to harm members of law enforcement.

“Although we each have the right to express our views about the decision reached by the state grand jury in Ferguson, Missouri, we cannot tolerate violence or threats of violence that are intended to intimidate, and ultimately silence debate,”  Hayes said. “Such threats are crimes, and the individuals who make them must be held to account.”

According to Abdul-Jabbaar’s Facebook page, which has since been removed, he works as an associate at Nintendo. His profile also appeared to have the Islamic State flag as the header image on his page.

“We all know this white motha fucka is going to walk when the grand jury deliver there [sic] answer,”prosecutors say Abdul-Jabbaar posted on November 16. “Who the fuck heard of the police policing themselves. This is some real bullshit. Whatever pocket change I got I’m ready to roll to lay down my life so who is ready to roll with me . . . There will be many real black men that will be putt’n in real work with that steel [firearm] will fall on the day when the grand jury let this motha fucka walk. I SAY ‘NO MORE.’”

While all of this was happening in plain view of the public eye, authorities say Abdul-Jabbaar communicated privately in messages sent to another Facebook user about wanting to purchase a gun. When a grand jury decided on November 24 not to indict Wilson in the August killing of Brown, Abdul-Jabbaar wrote to the individual, “Time to kill a cop.”

“We are fortunate to live in a country where the right to speak out about current events and disagree with our government is protected by the highest law of the land. Our freedom of speech does not, however, extend to making threats to kill or injure law enforcement officers,” Acting US Attorney Annette L. Hayes said in a statement accompanying Tuesday’s announcement.

“Although we each have the right to express our views about the decision reached by the state grand jury in Ferguson, Missouri, we cannot tolerate violence or threats of violence that are intended to intimidate, and ultimately silence debate. Such threats are crimes, and the individuals who make them must be held to account.”

Strangely, Abdul-Jabbaar posted on August 14 — the same day that authorities say he first started threatening Wilson’s life over Facebook — about how his social media account was being surveilled.

“EVERYONE ON FACEBOOK I MUST WARN YOU. THE FEDS ARE MONITORING OUR PAGES. AND FACEBOOK IS LETTING THEM DO SO FREELY,” Abud-Jabbar wrote.

Wilson resigned from the Ferguson Police Department on Saturday, November 29th, just days after a grand jury decided not to indict him in the shooting death of Brown on August 9th.