Sarah Palin decided to break her silence over the weekend in regards to the issues surrounding the incident and fallout in Ferguson, Mo.

There has been mass protests and rioting across the nation, leading up to and after, the grand jurys decision to not indict former Ferguson police officer Darren Wilson.

In doing so, she posted a meme that is circulating on Facebook that depicts President Obama.

In her attempt to be humorous, some found it to be comical and commonplace whereas others called the image ‘insensitive’ to the Ferguson rioters, looters and ‘undocumented’ immigrants aka illegal aliens. There were even those who went so far as to accuse her of being a race-baiter.

The meme, originally posted on a Facebook page, features President Obama with a quote reading: “I will be signing a new executive order replacing the word ‘looting’ with ‘undocumented shopping.’” 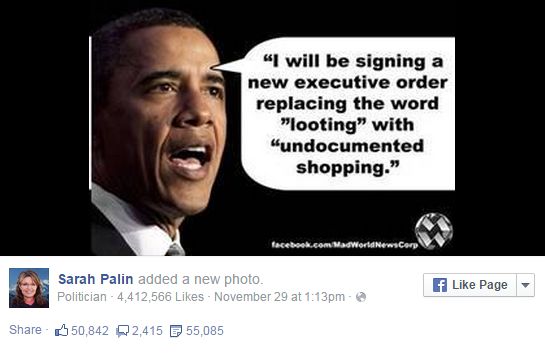 There were also people who didn’t quite understand what a meme is and believed that it was an actual quote. It wouldn’t be much of a stretch, considering how his administration has operated since his first day in the Oval Office.

Do you feel the post by Sarah was out of line, or that people are making a big deal out of nothing because of who she is?