Back in 2012, a teacher in the Los Angeles Unified School District was caught serving cookies to his students. No big deal, right?

Well, if these were chocolate chip cookies or some other desirable sugary treat then no, it wouldn’t be a problem, but the cookies the students consumed were made with semen. Yes, you read that correctly, semen…as in sperm. It ignited a legal saga that finally ended on Friday, November 21st.

The LAUSD will pay $139 million to end all litigation surrounding the case. The deal involving 82 students puts a legal end to the saga that began when Miramonte Elementary School teacher Mark Berndt was arrested in 2012 and accused of blindfolding students and feeding them his semen on cookies. 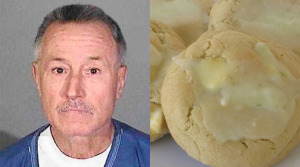 That sounds like a lot of money until you consider that this dirty pervert was guilty of sexual misconduct with students for three decades while employed as a school teacher.


The plaintiff’s lawyers had planned to present evidence suggesting the school district was aware of sexual misconduct by Berndt three decades ago but failed to act.

It wasn’t until a photo processor at a pharmacy contacted police about some film that Berndt dropped off, showing pictures of blindfolded children being fed some substance, that exposed the decades of dirty deeds.

The case led to an overhaul of how the nation’s second-largest school district handles allegations of sexual abuse. After Berndt’s arrest, the district removed all 130 staff members from the school and placed them at an unopened empty campus during the lengthy investigation.

“Our goal from the outset of these appalling revelations has been to spare the Miramonte community the anguish of a protracted trial, while at the same time being mindful of the financial consequences stemming from settlements,” Superintendent Ramon C. Cortines said in a statement. “Given these circumstances, we believe we struck a balance between those objectives.”

Berndt was sentenced to 25 years in prison after pleading no contest to 23 counts of lewd conduct.

The settlement reached during jury selection is in addition to $30 million the district previously agreed to pay to settle 65 other cases involving Berndt.