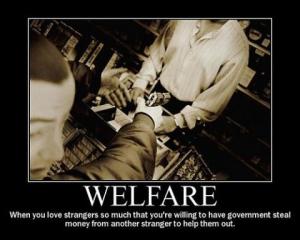 109,631,000 Americans lived in households that received benefits from one or more federally funded “means-tested programs” — also known as welfare — as of the fourth quarter of 2012, according to data released Tuesday by the Census Bureau.

The Census Bureau has not yet reported how many were on welfare in 2013 or the first two quarters of 2014.

When those receiving benefits from non-means-tested federal programs — such as Social Security, Medicare, unemployment and veterans benefits — were added to those taking welfare benefits, it turned out that 153,323,000 people were getting federal benefits of some type at the end of 2012.

When America re-elected President Barack Obama in 2012, we had not quite reached the point where more than half the country was taking benefits from the federal government.

It is a reasonable bet, however, that with the implementation of Obamacare — with its provisions expanding Medicaid and providing health-insurance subsidies to people earning up to 400 percent of poverty — that if we have not already surpassed that point (not counting those getting veterans benefits) we soon will.

It may be more telling, however, to compare the 109,631,000 Americans taking federal welfare benefits at the end of 2012 to Americans categorized by other characteristics.

Next BLACKS SCREAMED “KILL THE WHITE PEOPLE!” BEFORE BRUTAL MURDER OF ZEMIR BEGIC