This Santa is going to get some coal in his stocking this year after turning what should have been a joyful moment into sadness for a young girl.

At The Shops at Mission Viejo, California on Sunday, 7-year-old Abcde Santos, who is autistic, was excitedly waiting for more than 30 minutes to tell Santa what she wanted for Christmas when the man in red turned her away, the OC Register 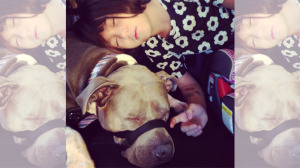 Julie Miller, a family friend and service animal advocate, told the newspaper that the family would not be doing interviews, but said they were “heartbroken” over the ordeal.

“For an autistic child to wait in line for 30 minutes, that’s an accomplishment in itself,” she said.

Miller, who also manages the “Pup-Cake, The Service Dog” fan page on Facebook

, said the family offered to remove the dog from the area and even explained that it was a trained service dog, but the Santa still refused to see the little girl.