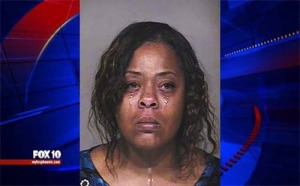 PHOENIX (KSAZ) –Her tearful mug shot drew sympathy from across the nation, and donations poured in to Shanesha Taylor, the mom who left her two kids in a car while she went on a job interview.

To avoid jail time, she made a deal with prosecutors. All she had to do was put that donation money into trust funds for her children and attend special parenting classes.

But Taylor missed the deadline to do so. So now many are wondering if she squandered tens of thousands of dollars in donations.

So just what happened to the nearly 100-thousand dollars in donations given to Shanesha Taylor?


“The money is gone by all accounts,” says Reverend Jarrett Maupin a former supporter of Shanesha Taylor. “It’s been spent on designer clothes, family outings in and out of this city and reports that $6000 spent on studio time for her baby daddy’s rap album.”

Maupin once fought to keep Taylor from going to jail by helping her bargain a plea deal.  Part of the deal was Taylor had to put aside $40,000 in donations in a trust fund for her kids. But she didn’t. Now the plea deal is off, her lawyers quit, and she has to go to trial.

“I feel bamboozled and used a little bit, but I don’t regret it because on its face she was what she was,” Maupin says. “Everyone had sympathy for her, but what she’s become is something quite different.”

Maupin says Taylor has turned into a diva who refuses to explain where the money is.

Many wonder could she have even spent some of the donations on drugs.

“We may very well find some of the money was spent that way,” Maupin says.

Answers may come during her trial. The judge and court could force Taylor to provide bank statements or call witnesses to the stand to explain how the money was spent.