If you watch television and the movies, you might get the impression that a punch to the head is no big deal.

That is not true.  A punch to the head is a very serious attack.

It can disable. It can maim. It can kill.  The head is a vulnerable target, which is why an attacker aims for it.  I first became aware of the deadly potential of one punch to the head in the 1970’s, from a long forgotten news story. 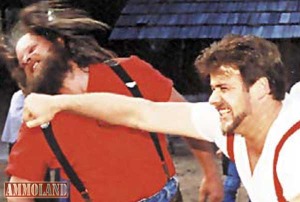 Later, the son of a close friend killed a man with one punch.  He was eventually found not guilty of manslaughter, but only after a long and expensive legal fight.

Everyone understands that a punch is more likely to knock you out rather than kill you.   But there is little practical difference for someone who is intent on defending themselves.   Once you are knocked out, you are at the mercy of your attacker.   They then have the choice of killing or maiming you at their leisure.

Prosecuting Attorney Dan Satterberg of King County, which includes Seattle, Washington, says King County has four to six one punch homicides every year. If King County’s one punch homicide rate is average for the U.S., which is impossible to tell because no one in the U.S., including the FBI, keeps statistics on the subject, then the U.S. has between 500 and 1,000 one punch homicides every year. Although this isn’t a huge number, it has other implications. Most single punches don’t result in a death, but for every death by one punch, how many other people experience serious injuries, including brain damage, because of one punch – 10, 20, 50, 100, or more?

Here is a well known case of one fatal punch from July of this year (2014):

John Bieniewicz, 44, died on July 1, two days after a player struck him at a community park in Livonia.

You do not have to allow yourself to be beaten before you defend yourself with deadly force; but you have to be able to reasonably explain why you understood that you were under the threat of potentially deadly force.

Next #FERGUSON: Where Open Carry Leads