One of the primary purposes of the second amendment is the ability to form militias to enforce public order.   The formation of informal militias during times of disorder, such as during natural disasters and riots is a completely natural and expected act.   Productive people have invested their lives in their property; when that property and their lives are threatened, neighbors band together to protect themselves and each other. 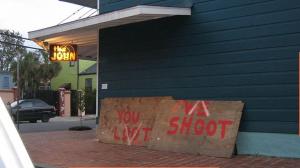 You do not see riots and looting in the suburbs and small towns, because there is no incentive to destroy what has been painstakingly built.   In the urban cores, riots occur because a large class of property-less people have been created who have little to lose, and the possibility of gaining a little loot and excitement offers a little escape from an existence without responsibility.

In Ferguson, responsible people, black and white, gathered together to protect private property.   They could do so in part, because of the second amendment and the restoration of open carry in Missouri.   Only a few weeks ago, the Missouri legislature overrode Governor Nixon’s veto, restoring the ability to openly carry arms for people who had a concealed carry permit.

It is hard to deter lawless looters if you cannot display arms; it can present legal difficulties if every property owner has to be constantly telling police that they have given permission for their friends and allies to bear arms on their private property.  Those who push for more and more concentrated state power do not want people to be able to defend their property, because they are not as dependent on the state.  They are not as easily cowed into subservience and obedience.

Machiavelli summed up the mindset rather well:

There is no comparison whatever between an armed and disarmed man; it is not reasonable to suppose that one who is armed will obey willingly one who is unarmed; or that any unarmed man will remain safe…. – Niccoló Machiavelli, The Prince. 1537.

It has been reported that federal agents in Ferguson have ordered some Oathkeepers to stop protecting property, under the pretext that they needed a license to do so.   No such license is needed for volunteers who are not being paid.   Stewart Rhodes, President of Oathkeepers was quoted as saying:

“They want to create a false paradigm… They are presenting a false choice between lawlessness, looting, arson, assault, murder on the one side, unrestrained, or a hyper-militarized police state on the other,” Rhodes said. “They are failing to do the intelligent thing and protect businesses without trampling on rights.”

Broom-handles and baseball bats are not effective tools for dealing with a mob of looters.  They have sticks and stones and Molotov cocktails to deal with that sort of defense.   It is much easier to destroy than to create.  But firearms are another matter.  Looters are likely to look for easier targets when they might lose their life, when a shot from the crowd can be answered with a volley in return, and when the open carry of arms by known felons is still illegal.

Fortunately, the grand jury in Ferguson did its duty.  They did not buckle to the intense pressure to indict, no matter what the facts.  The law abiding citizens of Ferguson knew that they were likely to prevail if they, like Officer Wilson, were required to use deadly force in defense of themselves.

Ultimately, this is a major reason why disarmists hate open carry.  If you cannot open carry, you cannot form informal militias to protect your property and livelihood.   You become dependent on the state for local security as well as national security; and if the state withdraws protection from you, as happened in the Rodney King riots in Los Angeles, or in Ferguson more recently, you are forced to suffer.

It would be against the law for people to gather together to protect themselves in New York City as they have in Ferguson. Open carry is illegal there. It would be illegal in Chicago as well. Open carry is illegal there. People in New York City are almost entirely disarmed through decades of strict implementation of the Sullivan Act, a statute that was put into place to protect organized crime. Chicago continues to fight the courts on allowing its residents to be armed. Unarmed people are more dependent. That is how many politicians prefer it.


Previous A Punch to the Head is Potential Deadly Force

Next There is simply no such thing as "white privilege"