A man witnessed a pregnant woman cheating on her boyfriend, and decided to expose her.

The woman was at a football game in Michigan, with her boyfriend when she was apparently caught texting a lover while her boyfriend sat beside her.

According to a post on Facebook written by the man who exposed her, the woman spent the majority of the time texting another man while her boyfriend watched the Detroit Lions game. 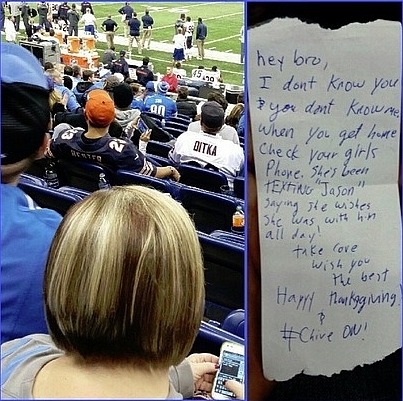 The man sitting behind the couple during the game wrote on Facebook, that she kept hiding her phone every time he looked her way or when he placed his arm around her.

The witness went on to say that the woman was in the late stages of pregnancy. The woman was accused of texting a man named Jason and she wrote: “I wish I was with you all day. I will see you as soon as I’m done with him.”

The man decided to expose the cheating woman by telling the boyfriend to check the woman’s phone.

At the end of the game, he handed the boyfriend a note which read: “Hey bro, I don’t know you and you don’t know me. When you get home check your girl’s phone. She’s been texting “Jason” saying she wishes she was with him all day!” 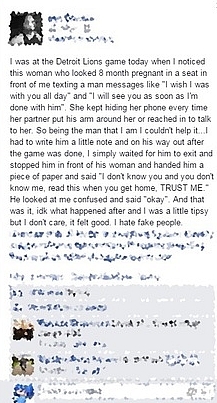 On his Facebook page the man wrote: “I was at the Detroit Lions game today when I noticed this woman who looks 8 months pregnant in a seat in front of me texting a man messages like ‘I wish I was with you all day’ and ‘I will see you as soon as I’m done with him.’

“She kept hiding her phone every time her partner put his arm around her or reached in to talk to her. So being the man that I am I couldn’t help it. I had to write him a little note on the way out. After the game was done, I simply waited for him to exit, and stopped him in front of his woman and handed him a piece of paper. I said: ‘You don’t know me and I don’t know you, read this when you get home, trust men.’

“He looked at me confused and said ‘Okay,’ and that was it. I don’t know what happened afterwards. It felt good. I hate fake people.”

Do you think this guy did the right thing? Leave us a comment below.

Next A Punch to the Head is Potential Deadly Force