An online invitation to a protest held earlier this week in solidarity with Ferguson demonstrators included some specific rules of behavior for whites interested in joining the event.

The ‘Hands Up, Don’t Shoot’ mantra that has emerged as a result of the August police shooting of Mike Brown – despite evidence that he was not attempting to surrender at the time of his death – was a prominent theme in Monday’s multiple college walkout in Massachusetts. 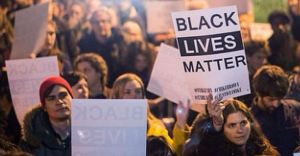 A Facebook description of the protest included a plea from one supporter aimed at “white folks” involved in the movement.

Despite the cries of racism that sparked the widespread demonstrations that began in Ferguson, Susanna Holmstrom apparently found it necessary to divide supporters along racial lines.

“Look,” she wrote, “I understand wanting to show up and support, but white people need to understand that this symbolic act of raising your hands in a position of surrender is meant to illustrate how black people are violently targeted by police because of their race.”

She went on to warn whites of the ostensible impropriety of joining in the gesture.

“If you don’t experience that, you should not mimic the gesture in an attempt at ‘solidarity,’” she cautioned. “It is centering yourself in a narrative that you cannot tell because of the protection your white privilege gives you.”

As Western Journalism reported last week, a similar protest in Canada offered rules white demonstrators were expected to follow, including an instruction to “refrain from taking up space in all ways possible.”