A Pennsylvania man is in some pretty serious trouble after being accused of impersonating a veteran after an actual veteran confronted him on camera. Ex-U.S. infantryman Ryan Berk askedSean Yetman some fairly standard questions that Yetman stumbled over.

Berk (who filmed the entire incident) noticed some inconsistencies in Yetman’s story and attire. At one point, Yetman insisted, “If I was a phony, then I wouldn’t be wearing this uniform.” 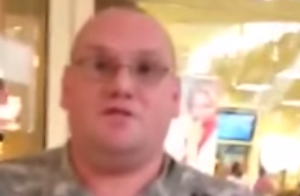 Berk then angrily confronted Yetman for being a “phony” and informed him that what he’s doing is illegal.

After learning about the case, Republican Congressman Michael Fitzpatrick called on a U.S. Attorneyto investigate the potential impersonation of a veteran, which is a federal crime.

Berk appeared on Fox & Friends earlier this week to talk about the incident. He said he immediately noticed some problems with the way Yetman was dressed, and explained this case particularly outraged him because he and friends served and sacrificed, so anyone pretending to have been a part of that is just horrible and wrong.

You can watch the confrontation here:

And you can watch Berk’s Fox News appearance here:

Previous Muslims hack Christian pastor and family with machetes, then burn them to death