Federal prosecutors say they will review an incident in which a Seattle police officer punched and seriously injured a handcuffed, intoxicated woman, after King County prosecutors said Friday they won’t charge the officer. 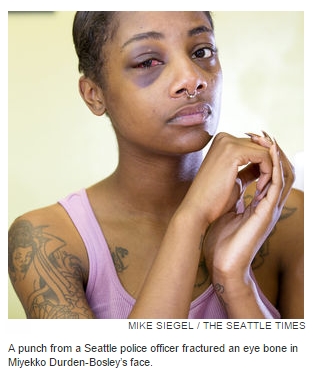 The decision comes after King County Prosecutor Dan Satterberg announced that his office would not seek a state felony charge against Shepherd, 38, a nine-year department veteran, for punching Miyekko Durden-Bosley in the back of his police cruiser.

Durden-Bosley, 23, was intoxicated and was verbally abusive after her arrest outside the home of a Seattle man whose mother had called the police. Durden-Bosley swore at Shepherd and kicked at him while being shoved into the back of a police cruiser, according to the investigation.

Shepherd reacted by punching her once in the face, fracturing the orbit of her right eye. Shepherd suffered no visible injuries, according to court documents.

Shepherd has been on paid administrative leave since the incident.

Satterberg’s decision reflects a deep difference of opinion between his office and City Attorney Pete Holmes, whose criminal chief reviewed the case earlier and thought it “undoubtedly met the felony standard,” according to a news release issued by Holmes on Friday.

Next ]Read[ Check out this Leftist Group’s Handout To Berkeley Protesters: White People Have To Stand Down And Allow “Black Resistance”…