Police use of excessive force has been a big national subject in the past few weeks, and a new video of Santa Clara police putting a man in a headlock and hitting him with batons may only add to it.

According to Deadspin, the individual who originally uploaded the video said the individual in question (later identified as Oregon man Mark Lydon) had walked down the wrong exit at Levi’s Stadium during the Pac-12 championship game. 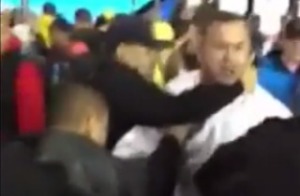 One cop was openly brandishing a taser, and the situation went downhill from there. You can hear Lydon in the video saying, “I need you to fucking not touch me!” And within the next minute, you can see officers putting Lydon in a headlock and hitting him with batons.

As this is unfolding and the officers are subduing him, you can hear people chanting, “He’s not fighting back!”

Santa Clara police have acknowledged the authenticity of the video and they’re expected to respond soon.

You can watch the video of the confrontation here: