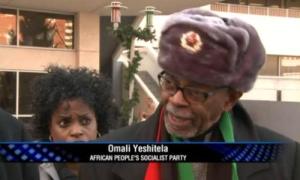 In a scenario that leaves little suspense as to the outcome, African-American community leaders will convene an all-black grand jury to review the evidence in the death of 18-year-old Michael Brown.

The mock grand jury will convene for two days, beginning Jan. 3, 2015, Fox affiliate KTVI reported. It is not clear if the organizers are from the Ferguson, Mo., area.

“What it does is educates and informs our people that two bodies came together, examined the same set of evidence, and were able to come to different conclusions,” Omali Yeshitela told KTVI.

Yeshitela, with the African People’s Socialist Party, appears to have already determined that the black grand jury will arrive at a different conclusion than the St. Louis County grand jury before it has seen the evidence — which may say all that needs to be said about the process.

(It’s worth noting here that the original grand jury consisted of nine whites and three non-whites and three blacks. If Yeshitela and his ilk really wanted a fair racial do-over, they’d include three whites in this travesty.)

It’s not likely that any of the men will comply.

Once the black grand jury has found Wilson guilty, Yeshitela said “the only thing standing between us and our ability to carry out the will of the people is to change this relationship that exists between us and the armed state apparatus that controls us.”

Fortunately for Darren Wilson, or any white man that may have the misfortune to come before the mock grand jury, any decisions forthcoming carry no legal weight.


Previous This is why I don't give a damn if terrorists are tortured. In fact, I demand it!