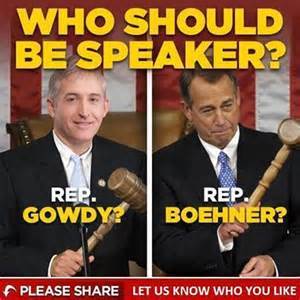 John Boehner, the artificially-tanned, slobbering, whining, ass-kissing lush who is our current Speaker of the House of Representatives may be on his last legs as Speaker if the Twitter campaign to remove him has anything to do with it.

To be kind, Boner has been negligent in his duty to the American people. He has allowed King Hussein to run roughshod over our Constitution, effectively neutering the House of Representatives. He has been Obama’s lapdog.


Of the handful of individuals most culpable in the shoving of King Hussein’s agenda down the throats of the American people, Boner is at or near the top of the list. He should be sent, posthaste, back to Ohio to resume his bartending career.

But with the Speaker’s chair deboned who would the Republicans choose as Speaker of the House?

Enter Trey Gowdy, a Pit Bull conservative whose perpetual scowl has terrified liberal weenies from Jonathan Gruber to Hillary Clinton. The hair identity issue aside, Gowdy has proven himself to be a competent and passionate constitutionalist. And America has noticed.

There is a vigorous Twitter campaign underway to draft Gowdy as Speaker. Jump in! It’s well past time we had a sober adult in charge of something.

Trey Gowdy for Speaker of the House should be something that every conservative can rally behind weed out the rhinos! pic.twitter.com/5kZydZiyMU

All I have to say is Trey Gowdy for Speaker! Boehner is a spineless lapdog

TREY GOWDY FOR SPEAKER OF THE U.S. HOUSE OF REPRESENTATIVES REPLACING JOHN BOEHNER.
RE-TWEET IF YOU AGREE!

Trey Gowdy for Speaker of the House!!!! Needs to happen!