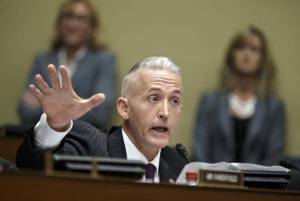 The head of a special House committee tasked with investigating the Benghazi attacks vowed to keep digging, despite another congressional panel debunking many conspiracies surrounding the 2012 incident.

“We may answer some [questions] more than once,” said House Select Committee on Benghazi Chairman Trey Gowdy during a hearing Wednesday. “I would rather answer a question twice than risk not answering it at all. That would seem a rather small investment.”

The South Carolina Republican suggested his committee will hold monthly public hearings during early 2015, pledging to “keep asking questions until we have a complete understanding of what happened.”

Wednesday’s hearing, which featured two witnesses — Greg Starr, assistant secretary of state for diplomatic security, and State Department Inspector General Steve Linick — was the panel’s second since it was created earlier this year.

The Obama administration originally said the assault at the diplomatic mission in Benghazi, Libya, was spontaneous and linked to protests earlier that day in Cairo against an American-made video denigrating the prophet Muhammad. That explanation, repeated several times by administration officials in the days after the Sept. 11, 2012, attacks, was later disproved.

Gowdy and other Republicans have suggested the administration knew all along that the Benghazi attack was planned by an organized anti-American terrorist group but was reluctant to admit it for fear the truth would tarnish its anti-terrorism efforts in the region.

But a report by the GOP-lead House Intelligence Committee that was declassified in November concluded that while the U.S. officials ignored warnings of terrorist threats, administration appointees weren’t directly to blame.

And Rep. Elijah Cummings of Maryland, the Benghazi committee’s senior Democrat, said the House intelligence panel’s report should serve as the “definitive House statement” on the U.S. intelligence community’s activities before, during and after the attacks.