A Christmas-themed sign outside of a firehouse in Utica, New York, is drawing the ire of atheists, who argue that its message poses a constitutional violation.

According to reports, Utica Fire Department Station 4 decided to display a sign outside of its building which reads, “HAPPY BIRTHDAY JESUS WE LOVE YOU.” This is reportedly not the first year that the fire station has put up the sign, as people have complained in the past. But this year, the Freedom From Religion Foundation (FFRF) sent the city’s mayor a letter asking that the sign be taken down. 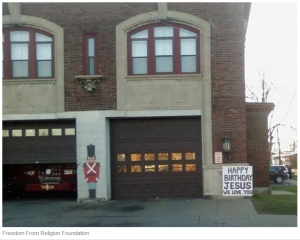 “The sign at Fire Station 4 explicitly invokes the name Jesus, an exclusively Christian god, and makes a direct statement in support of that deity (‘WE LOVE YOU’), on behalf of the station and City,” reads part of the letter. “This is precisely the sort of religious endorsement prohibited by the Establishment Clause.”

The organization reportedly sent a different letter back in April to Utica fire chief Russell Brooks asking that the sign not be allowed this year, but he responded saying that they were well within their rights to display the sign.


“I was advised by the Thomas Law Center that we were well within our rights to display our Christmas sign,” Brooks wrote in a response sent in May. “In addition, they would support us, as well as any efforts from any organizations looking to prevent us from doing so.”

Now, with a letter sent to Utica Mayor Robert Palmieri on Dec. 10, many are waiting to see how the city will respond. In the meantime, the FFRF is continuing to speak out against the sign.

“About 20% of Utica citizens are nonreligious and others follow non-Christian faiths — and that includes Utica firefighters,” FFRF co-president Annie Laurie Gaylor wrote in a statement. “The Utica Fire Department should not send them this exclusionary and alienating message. How would Brooks feel if his local government put up a sign saying, ‘Happy Birthday, Mohammed. We love you!’? This sign is equally inappropriate because government bodies should not take sides on religion.”

Next [WATCH] COP TO MILITARY VETERAN: “I Am A Cop, You Understand You Stupid Motherf***er”