A Long Island federal jury rewarded Nancy Genovese, 58, a mother of three, $1.12 million in compensatory damages after being arrested in 2009 for attempting to photograph a helicopter at a Air National Guard base in the Hamptons. Genovese intended to use the photo on a “Support the Troops” website; she was arrested for trespass and insulted as a “Teabagger.” 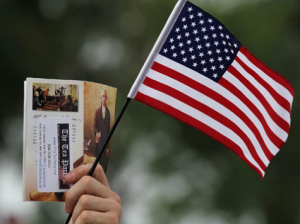 Southhampton cops searched her and found a legally owned rifle that she was transporting from a nearby rifle range. She contends a deputy sheriff arrived on the scene later and said to her, “I bet you are one of those Tea Party people.” When Genovese said she’s gone to Tea Party rallies, he allegedly said, “You’re a real right-winger, aren’t you?” and “You are a ‘Teabagger’” and then added that she’d be arrested for terrorism to make an example of other “right wingers.”

“What they took from this woman cannot be measured in money,” said her lawyer Frederick Brewington.“There is no reason to treat another human the way they treated her.”

The New York Post also mentioned Genovese “was armed to the teeth with a licensed assault rifle.” The description is very misleading since the police only found one rifle in her car, which is legally owned.

Authorities jailed Genovese for four days before she posted $50,000. The court dismissed the charge in November 2009, but Brewington claims she “was subjected to humiliation and was strip-searched” during her four days in prison.

Next ---Video Alert--- The NEW FACE and Tactics of the Identity Thief.