At least 141 people, most of them students as young as 12, have been killed and more than 100 others injured in a Taliban seizure of a military-run school in the city of Peshawar, Pakistan, according to provincial authorities.

The numbers of dead and injured may still rise as the casualties of the assault are counted. The army told AFP that the number had risen to 141 late Tuesday afternoon, up from a previously cited figure of 130.

Some 500 students and teachers were in the Army Public School on Warsak Road at the time of the attack. Pakistan’s military said most of the civilians escaped, but some had been taken hostage by the assailants.

Several militants dressed in Pakistani military uniforms entered the school compound on Tuesday at around noon. They torched a car at the site and proceeded with a raid on the facility. 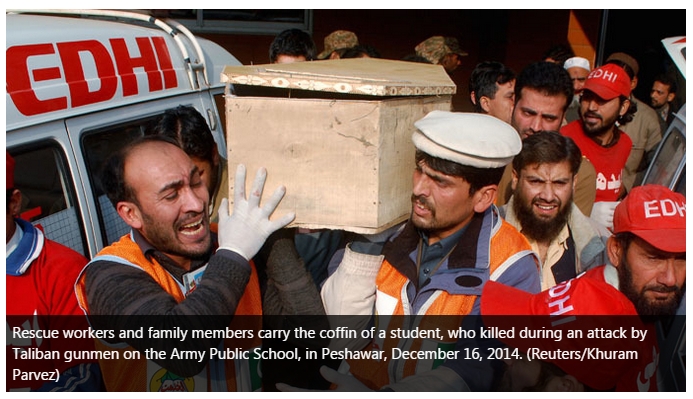 “Seven to eight people attacked us, then an army soldier came to us and he asked [the] principal and teachers to take the children out of compound from the back gate. There were thousands [of] students in college. They were moved to auditorium, they can’t come out until the fight is ended,” Arshad Khan, a student at the school, told RT’s Ruptly.

The Pakistani Army responded to the emergency, dispatching security forces to cordon off the area and sending military helicopters for surveillance. A commando force arrived at the site.

“As the firing started our teacher asked us to bent down and we went to a corner of the class, after one hour when firing reduced, [an] army officer came and rescued us, but as we came out we saw on the way in corridors our friends were lying dead on ground hit by bullets, some with three, some with four bullets. They were bleeding,” another student, Muhammad Naeem, said.

Two loud booms of unknown origin were heard in the early afternoon, according to AP.


Previous BREAKING! Taliban kills 141 at Pakistan school. More love and compassion from the religion of peace!