A man was about to indulge in an order of wings from Zembie’s Sports Tavern in Harrisburg, Pennsylvania, when he noticed he was identified on his receipt with a racial slur.

Marquis Moore, 29, who is African American, was identified on his receipt with the expletive by the bartender, Megan Bonsall.

Moore said that he and Bonsall aren’t acquainted but that he’s been a regular customer at the tavern, and adding that he won’t be giving them anymore of his business.

Zembie’s owner, Angelo Karagiannis, said he addressed Bonsall and insists the incident was a misunderstanding and that she didn’t mean any harm. 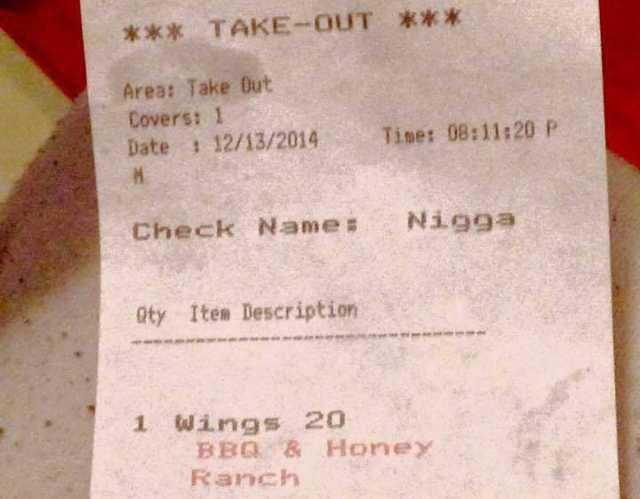 “It makes me feel like I’m just low,” Moore said. “A nigga is an ignorant, disrespectful person. It has nothing to do with your skin color. What would possess you to put something like that on a piece of paper? You don’t even know who I am.”

Karagiannis said that after Moore ordered the wings, he began talking to other bar patrons. Not wanting to interrupt Moore, Bonsall asked Moore’s friend what his name was. That friend showed her Moore’s Facebook page, where he identified himself as a “sexy nigga,” Karagiannis said. Bonsall apparently believed it was funny, so she put it on the receipt.

“Megan has worked for me for 12 to 13 years,” Karagiannis said, noting that he has told employees not to identify customers on checks by physical characteristics. “There was no malice intended at all. We have a Redskins fan club, and every week there are 12 to 15 black guys who come in to watch the games. We are not racist at all and serve anyone.”

Moore claims that Karagiannis isn’t being truthful about what happened and states that he never spoke with anyone at the bar; he just drank his beer and waited for his order. Moore said he had called himself a “sexy nigga” in a comment on his Facebook page, but believes Bonsall found the comment after the incident and is using it to justify her actions.

“Even if that is the case, why didn’t she put ‘sexy nigga’ on the check?” Moore asked. “I’m hurt by the situation. I am just a random Joe, and she could have just taken the time to ask my name,” he said. “Racism is no longer behind closed doors.”


Previous [WATCH] COP TO MILITARY VETERAN: “I Am A Cop, You Understand You Stupid Motherf***er”