Aaron Hodges, a sales associate at Nordstrom, took to Facebook to express his views on the recent police shootings in America.

He was reportedly fired from the company after he posted inflammatory comments online that advocated the murder of police officers.

“Instead of slamming the police, I prefer a Kenny Fort approach,” Hodges commented. “Every time an unarmed black man is killed, you kill a decorated white officer, on his door step in front of his family.” 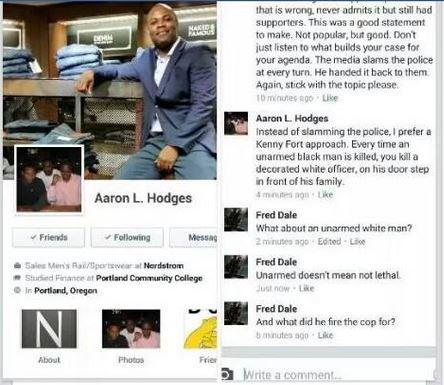 Hodges appears to be alluding to the recent killings of Michael Brown, Eric Garner and Tamir Rice at the hands of police officers.


Although Hodges probably thought his comment was harmless, a screenshot of his remarks quickly made its way around the Internet. It wasn’t long until Nordstrom began receiving complaints on the company Facebook and Twitter pages, and the end result was the firing of Hodges.

“What our former employee chose to post from his personal account does not in any way reflect our views as a company,” Tara Darrow, a Nordstrom spokeswoman, said in a statement. “We do not tolerate violence, violent conversation or threats of any kind.”

Nordstrom also confirmed that Hodges was fired in a tweet from their official page that read, in part, “he is no longer one of our employees.”

Reports say that Hodges has since closed down his social media accounts following the remarks and subsequent firing.

Next Ferguson like you have never heard.... In the Red’s Barbecue parking lot alone, sixty-six shell casings were recovered after being fired at Police