Jeb Bush put an end to a lot of speculation, and jump-started buckets more of it, by announcing via Twitter that he had announced via Facebook that he was “actively exploring” a run for the 2016 GOP nomination:

Bush said that over Thanksgiving, “We shared good food and watched a whole lot of football. We also talked about the future of our nation. As a result of these conversations and thoughtful consideration of the kind of strong leadership I think America needs, I have decided to actively explore the possibility of running for President of the United States.”

I am excited to announce I will actively explore the possibility of running for President of the United States: https://t.co/luY4lCF2cA.

In January he wrote, “I also plan to establish a Leadership PAC that will help me facilitate conversations with citizens across America to discuss the most critical challenges facing our exceptional nation. The PAC’s purpose will be to support leaders, ideas and policies that will expand opportunity and prosperity for all Americans.” 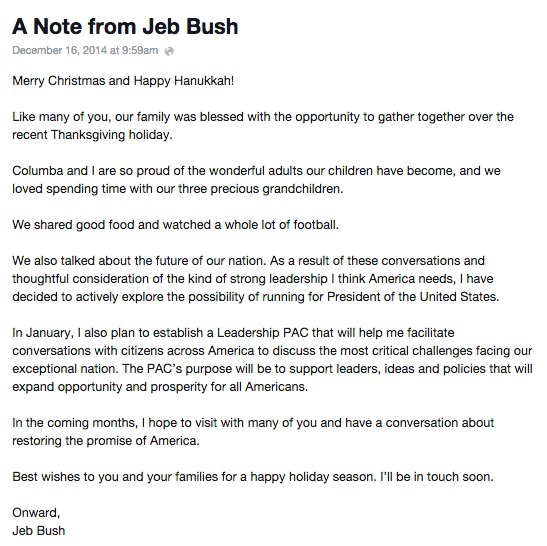 Let me tell you something, if the only choices America has in the coming presidential election is Hillary Clinton and Jeb Bush, we will have taken our last breath as this nation is swallowed by the crapper.

Choosing between Clinton and Bush is akin to being forced to take a bite out of big shit sandwich because that’s exactly what it is. I voted for George W. Bush and would gladly do it again, but there’s not so much as a snowball’s chance in hell that I will vote for Jeb ‘The Jackass’ Bush.

Previous READY FOR HILLARY? Her Face is On The Cover of The WORST Selling Issue of People Magazine This Year