Hillary Clinton may be dominating her potential Democratic opponents in a likely run to the nomination, but when it comes to beating the competition on the media and book sales front, that’s proving to be a much bigger challenge.

For example, this past June, Mrs. Clinton was featured on the cover of People magazine for the first time in over a decade. This coincided with the height of her book tour, which featured dozens of radio and television appearances, putting the former Secretary of State firmly back in the limelight. 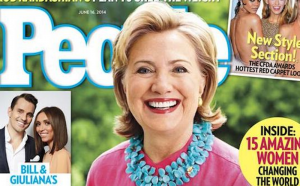 But for whatever reason–Hillary fatigue, the gaffes on the book tour highlighted by the infamous “flat broke” comment, or simply nothing new to report on a public figure that has been in the spotlight for over 20 years–the issue now stands as People‘s worst-selling of 2014, with only 503,890 copies sold. People’s best-seller was not surprisingly the August 25 edition with Robin Williams on the cover shortly after his shocking suicide that shook the country, with 1,169,800 purchased.

Clinton’s lackluster People showing was followed by tepid book sales for the heavily-promoted Hard Choices, which fell well short of expectations for a book Simon & Schuster paid the author a $14 million advance for, the second highest in history. The publisher was looking for one million copies sold, but the book couldn’t come close to the 300,000 mark after mostly tepid reviews.

Previous UP YOURS NORTH KOREA: Human Rights Group to Airdrop 'The Interview' DVDs into North Korea

Next JEB BUSH: "I Will Actively Explore" 2016 Run, Proving It CAN Get Worse Than Obama For America