Alecia and Bounkham Phonesavanh never imagined their family would be at the center of a controversy over the militarization of police. But that’s exactly where they found themselves after a botched SWAT team operation left their 18-month-old child ‘Bou Bou’ critically injured, leaving them with a $1 million medical bill they have no hope of paying.

“They messed up,” Alecia Phonesavanh told ABC News’ “20/20.” “They had a faulty search warrant. They raided the wrong house.”

At approximately 2 a.m.on May 28th, the family was awakened by a blinding flash and loud explosion in their bedroom when the Habersham County SWAT stormed the house with a ‘no knock’ permit. Police reports show that Habersham Deputy Charles Long threw a “flash-bang” grenade – a diversionary device used by police and military – into the room. It landed in Bou Bou’s pack-and-play, where he was sound asleep.

“Bou Bou started screaming,” recalls Alecia Phonesavanh. “I immediately went to grab him.” But before either parent could see or hold him, Alecia says Habersham Deputy Jason Stribling picked up the child and carried him out of the house


“I kept telling him, ‘Just give me my son. He’s scared. He needs me. The officer wouldn’t. And then he walked out of the room with [Bou Bou] and I didn’t see him again,” said Alicia.

She added “I asked if he got hurt and they said, ‘No, your son is fine. He has not sustained any serious injury.’ They ended up telling us that he had lost a tooth.”

But her husband became alarmed when he saw a pool of blood and the condition of the crib. “Burnt marks on the bottom of the crib where he sleep[s],” recalls Bounkham Phonesavanh. “And the pillow blown apart.” 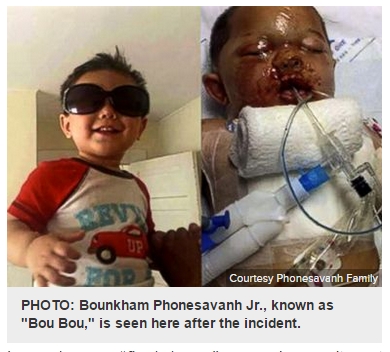 What wasn’t known at the time was that the blast from the flash-bang grenade severely burned young Bou Bou’s face and torso, and collapsed his left lung. Alecia says the officers wouldn’t allow her to see her child before he was whisked away in an ambulance.

When Bou Bou arrived at Grady Memorial Hospital in Atlanta,  he was placed in a medically induced coma. “His chest wall had torn down to muscle,” says Dr. Walter Ingram, head of Grady’s burn trauma unit. “And it tore his face down to bone, down to his teeth.”

Several members of the police force, including the drug informant and the man who signed the warrant, resigned within days of the intrusion. The drug task force was disbanded entirely four months later.

Bou Bou spent more than five weeks in a medically induced coma but has been released from the hospital.  A Habersham County’s grand jury found that, “The drug investigation that led to these events was hurried, sloppy.” However, they did not recommend criminal charges against those involved.

Bou Bou has had multiple surgeries to repair his damaged face and torso.  Habersham County refuses to pay the bill, amounting to over $1 million, referencing a “gratuity” law.  The Phonesavanh family has the option of filing a civil lawsuit.

Next REBUKED: Political Correctness Just Took A Major Blow From This Unlikely Source