In what could be considered a victory for the Washington Redskins, the FCC (Federal Communications Commission) has ruled that the name “Redskins” — despite the repeated claims that it is offensive and derogatory to Native Americans — does not violate prohibitions against indecent content for radio broadcast.

The ruling is rather unexpected because FCC Chairman Tom Wheeler himself is a critic of the team’s name. As a post at YoungCons.com reminds us:

He recently called the name “offensive and derogatory,” and said that he did not use the term personally.

Fox News reported that the FCC has rejected the petition to deny renewal of the broadcast license for the team’s flagship radio station in Washington, D.C.

The petition claimed repeated use of the word “Redskins” violates rules against indecent content.

But the FCC said that the law defines profanity as sexual or excretory in nature — meanings that don’t relate to the name of the football team.

The FCC is directed by five commissioners which presently consist of three Democrats and two Republicans who are appointed by the president, all of which are serving five-year terms. 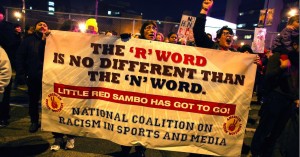 The petition requested the FCC consider that saying “Redskins” on the air is obscene or profane was spearheaded by a George Washington University law professor. It was directed at WWXX radio, which is operated by a company of which Washington Redskins owner Dan Snyder is a primary investor.

Snyder has recently come under heavy pressure to change the team’s name, with Democrats on Capitol Hill and the White House charging that “Redskins” is an insensitive slur.

As Western Journalism has reported, Snyder has stood firm in his defense of the team’s name, imagery, and symbols. Snyder and others insist the name is meant as an honor and a tribute to Native Americans’ contributions to the country.

Earlier this year, the U.S. Patent and Trademark Office cancelled six of the Redskins’ trademarks.