“Misleading at best, total nonsense at worst” is how Julia Belluz describes her gut feeling over the years about the accuracy of Dr. Mehmet Oz’s medical advice, she writes at Vox.com.

Now she’s got science to back her up, thanks to a study published in the British Medical Journal that analyzed health recommendations from Oz’s syndicated TV talk show, as well as nuggets from the popular The Doctors. 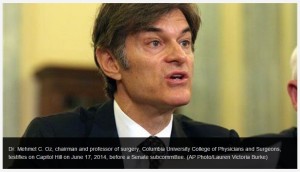 The researchers found that about half of the suggestions offered by these shows either contradicted what other scientific studies had found or had no verifiable evidence at all to stand behind them, and that potential conflicts of interest were seldom mentioned.

The study looked at 40 random episodes from each show—instead of simply, as Belluz points out, “cherrypicking the worst offenders”—to get the fairest assessment. In general, each episode offered up about a dozen health recommendations, so the researchers were able to cull 479 health tidbits from Dr.

Oz’s show and 445 from The Doctors. Most of the shows’ suggestions involved dispensing general medical advice, followed by non-weight-loss dietary tips; theDoctors professionals tended to repeat the mantra of seeking out a health care provider.

But while the benefits of many of the claims were talked about in a general way, specific benefits and magnitude of those benefits, possible drawbacks, and costs were virtually ignored, the study found.

The researchers’ conclusion? “Consumers should be skeptical,” and we should ask ourselves “whether we should expect medical talk shows to provide more than entertainment.” (Dr. Oz’s “magic bean” recently lost the study that supported it.)

This article originally appeared on Newser: Science Shows Half of What Dr. Oz Says Is Bunk