As another predictably violent year draws to a merciful close in the city of Detroit, a new article published today by the Detroit News noted that homicide totals are down 6 percent relative to last year.

The modest drop in the homicide rate was partially attributed by local law enforcement to the ever increasing number of lawfully armed citizens. In addition, the same article also published that justified homicides spiked from 16 last year to 22 this current year – an increase of 38 percent. 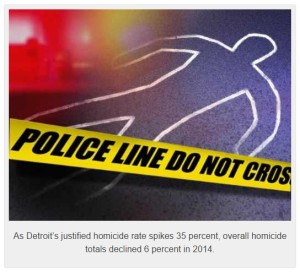 Unlike prior Detroit Police Department (DPD) Chiefs, current DPD Chief James Craig has been publicly vocal throughout his tenure about the potentially deterrent effect of lawfully armed “Good Americans” and Concealed Pistol License Holders on violent crime rates. In the aforementioned article, he was quoted as saying, “People feel the need to protect themselves. Maybe that’s helping drive down robberies. Maybe the criminals are afraid they’ll be confronted by someone who has a gun.”

In addition, Chief Craig – who came under fire politically by vocal anti-gun and anti self-defense advocates earlier this year when he appeared on the cover of the National Rifle Association’s (NRA) America’s First Freedom Magazine – stuck to his guns and was quoted as saying, “I’m pro safety. I’m pro life. I’m pro law-abiding citizens staying alive, having the ability to protect themself (sic) in a dangerous situation.”

Under the Castle Doctrine in the state of Michigan, it is presumed that persons either in the process of breaking into a home or persons who have already broken into a home are a threat of imminent danger of at least great bodily harm, sexual assault, or death to any occupants of the home.

As such, persons in the home during the aforementioned attack are justified in using lethal force against the invaders. However, that presumption can be rebutted by the County Prosecutor but it is his burden to prove beyond a reasonable doubt that the home invaders presented no threat of danger to the occupants.

Furthermore, it should also be noted that there a few exceptions to the Castle Doctrine, such as in the case of sworn peace officers who enter a dwelling under the auspices of their lawful duties.

Moreover, Michigan law also extends the Castle Doctrine from the home to “any place where a person may legally be” without a duty to retreat. As such, any person may defend himself as long as he is not breaking the law and he has both a reasonable and honest belief that he is facing an imminent danger of great bodily harm, sexual assault, or death. Any usage of lethal force will be thoroughly investigated to confirm that the aforementioned parameters were met.

Among the 22 confirmed justified homicides in the city of Detroit this year, were the following examples:

In one incident, a 54 year old woman at home, who had already suffered seven prior break-ins, heard a loud sound generated at a side window of her home. She grabbed her gun and proceeded to investigate. She found an intruder entering her home through that window. She gave several warnings but the intruder proceeded to enter anyway. She discharged her firearm and the predator was shot and killed.

In another incident, a man of an unspecified age heard the sound of shattering glass at the rear of his home. Allegedly, two men were attempting to invade his residence through a window. The home owner retrieved his firearm and discharged it at the bad guys. One invader was struck and killed while the invader’s accomplice managed to evade capture.

Detroit residents are fed up with violent crime. Additionally, it appears that they are still ready, willing, and able to defend themselves. Hopefully, this trend will continue as long as violent predators feel emboldened to attack, rob, rape, and home-invade citizens.

Furthermore, it should also be noted that there have not been any cases this year within the city of Detroit in which a lawfully armed citizen has been charged with a crime while defending himself. Thusly, the lawfully armed citizens of Detroit continue to show that good people can be entrusted with the responsibility of carrying a firearm for personal protection. 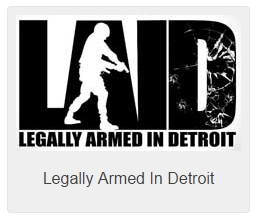 About The Author
Rick Ector is a National Rifle Association credentialed Firearms Trainer, who provides Michigan CCW Class training in Detroit for students at his firearms school – Rick’s Firearm Academy of Detroit.

Ector is a recognized expert in firearm safety, a gun rights keynote speaker, and has been featured extensively in the national and local media: Associated Press, NRAnews, Gun Digest, The Politics Daily, Fox News Detroit, The Detroit News, Lock-N-Load Radio, WGPR and the UrbanShooterPodcast.