Advocates for gun control are liars.

They specialize in taking some little snippet of fact and presenting it in a way that totally misrepresents reality.

Statements like “3000 children are killed with guns every year,” don’t inform people that most of those “children” are late-teen gang-bangers who are actually killed by adults, or that accidental firearm deaths among children and youths have been falling for decades and are currently at historic lows, despite the fact that guns and gun ownership are up dramatically. 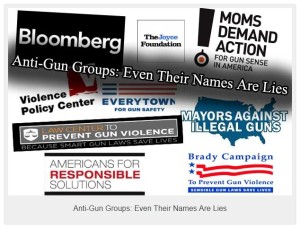 The claim that “gun deaths exceed traffic deaths” in this or that state, conceals the fact that two thirds of those deaths are suicides, and that suicide rates in “gun friendly” states are comparable to rates in “gun restrictive” states. Still these misleading “factoids” are unquestioningly parroted by “journalists” based solely on press releases from professional anti-rights lobbyists.

All of them focus exclusively on restricting firearms – gun control – while ignoring the fact that gun control laws have no impact on gun violence and no relation to gun safety.

They don’t just lie in their names and about their objectives, they also lie about who and what they are. They present themselves as grassroots organizations – some claiming as many as two million “supporters” – or as research foundations, but they have few, if any, actual members, and they don’t do any actual research. None are funded primarily by contributions of regular concerned citizens, though they will take some misguided rube’s $20. These not-for-profit corporations are funded primarily by huge grants from “leftist charitable foundations” like the Joyce Foundation or the deep pockets of billionaires like Mike Bloomberg and George Soros.

A little digging reveals that their “supporters” include anyone who ever “signed” one of their on-line petitions, signed up for their email alerts, or “Liked” their page on Facebook, and many are probably counted two or three times. I, like many gun owners I know, am probably counted as a “supporter” because I signed up for their email alerts as a way of monitoring their activities. And the “research” these charlatans put out could be compared to me calling my columns research papers. The only difference is that my columns are more factual and less biased. 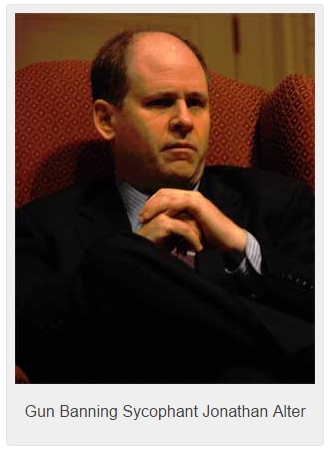 Back in December of 2012, shortly after the horror at Sandy Hook Elementary School, columnist and Obama sycophant Jonathan Alter wrote a piece for Bloomberg View in which he laid out a blueprint for advocacy operations wishing to advance a gun control agenda. The piece was titled To Get Better Gun Control, Don’t Use the Phrase. In it Alter called for the building of a “smarter, more effective movement for commonsense gun laws” to counter the intimidating influence of the NRA. He compares such a movement to the abolition of slavery and women’s suffrage, noting that “every great stride forward in U.S. history has come from ordinary people defying the odds and bringing organized pressure to bear on politicians.”

He advises the retirement of the phrase “gun control,” in favor of more appealing terms like “gun safety,” “anti-violence regulation,” and especially, “common sense.” The Brady campaign to Prevent Gun Violence, and the National Coalition to Stop Gun Violence, which changed their names from Handgun Control, Inc., and the National Coalition to Ban Handguns, respectively, apparently figured some of this out decades ago, but Alter insists that lack of funds kept these groups from being able to reach “moderate, compassionate people” in the suburbs.

Alter’s solution to the problem of ordinary people not rising up in righteous indignation to demand that the government repress their constitutional rights, take away their means of protecting themselves, their families, and the Constitution, and make criminals of them should they dare to swap guns with their shooting buddies, is to further obfuscate the language of the debate and inject massive funding – which he intimates is on the way – into the coffers of those who advocate for further restrictions.

One year later, the guy who signs Alter’s paycheck, Mike Bloomberg, rolled out his new and improved gun control gun safety advocacy conglomerate, Everytown for Gun Safety, which incorporated his previous gun control common sense advocacy group, Mayors Against Illegal Guns, and a floundering new group called Moms Demand Action for Gun Sense in America. Bloomberg, who was already propping up other gun control gun violence prevention agencies with hundreds of thousands of dollars in grants, promised to fund the new effort with at least $50 million of his personal fortune to take on the NRA head-to-head.

This past November he did just that and was trounced at the polls nationwide. It wasn’t because he didn’t spend enough money, or because his sophisticated social media campaign didn’t burn up the internet; the reason was, unlike his astroturf organizations, the pro-rights movement has actual grass roots organizations with real, live members who refuse to be swayed by his impressively deep pockets and his deceptive marketing.

The only real win Bloomberg and his minions managed to pull off was in Washington state where NRA made little effort, and fellow billionaires like Bill Gates and Paul Allen gave Bloomberg an 8 to 1 spending advantage. With that he managed to dupe a majority of voters into believing that forcing all firearm transfers – even swaps with buddies or loans to friends – through federal dealers, with all of the associated paperwork and expense, isn’t gun control.

Now Bloomberg is bringing his lie machine to Nevada, Oregon, Arizona, and Maine, while already pushing additional restrictions in Washington State. Let’s hope voters are smart enough to realize that any organization that is unwilling to openly disclose their full agenda to the people cannot be trusted to be working for the benefit of the people.

About:
The Firearms Coalition is a loose-knit coalition of individual Second Amendment activists, clubs and civil rights organizations. Founded by Neal Knox in 1984, the organization provides support to grassroots activists in the form of education, analysis of current issues, and with a historical perspective of the gun rights movement. The Firearms Coalition is a project of Neal Knox Associates, Manassas, VA.

©2014 The Firearms Coalition, all rights reserved. Reprinting, posting, and distributing permitted with inclusion of this copyright statement. www.FirearmsCoalition.org.

Next [VIDEO] Homeowner Warns Armed Intruders Not To Take Another Step, It Was Their Final Mistake